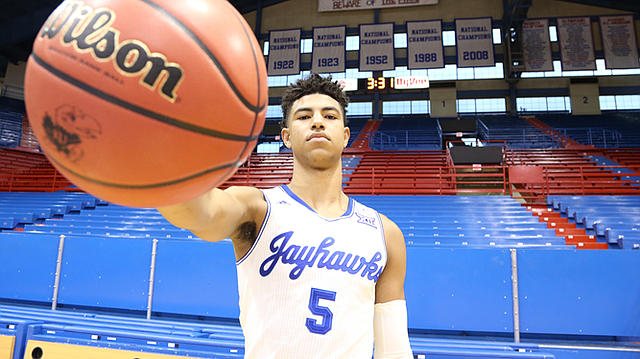 Five-star guard Quentin Grimes, from The Woodlands, Texas, signed a National Letter of Intent to play men's basketball at the University of Kansas on Wednesday, Nov. 15, 2017.

A season’s worth of hype and praise was heaped onto Kansas freshman Quentin Grimes long before the smooth combo guard from Texas even thought about suiting up for his first game with the Jayhawks. By Matt Tait

Quentin Grimes, a five-star guard ranked No. 11 by Rivals.com in the Class of 2018, announced his commitment to Kansas at a ceremony at College Park High in The Woodlands, Texas on Wednesday, Nov. 15, 2017. Shortly thereafter, he sent his national letter of intent to the KU basketball offices to make his commitment official. By Matt Tait