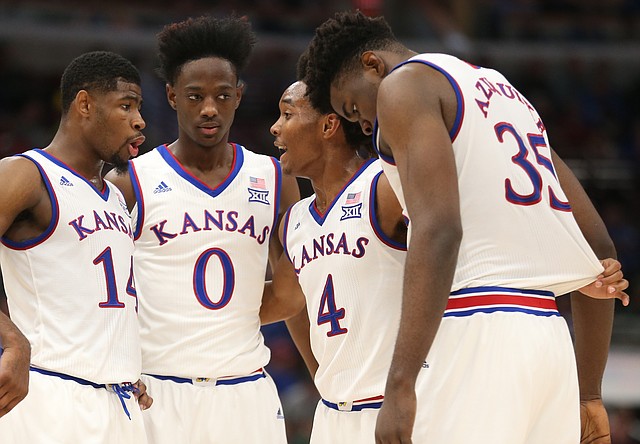 Kansas guard Devonte' Graham (4) pulls his teammates together in a huddle during the first half on Tuesday, Nov. 14, 2017 at United Center.

A look at some of the keys for second-ranked Kansas in Saturday's Hoophall Miami Invitational vs. Syracuse at American Airlines Arena in Miami. By Matt Tait

A look at some of the keys for fourth-ranked Kansas in Friday's matchup with South Dakota State at Allen Fieldhouse. By Matt Tait

No. 4 Jayhawks top No. 5 Wildcats in blue blood battle

College basketball’s two winningest programs squared off Tuesday night at Chicago’s United Center, and though the game footage won’t be headed to the hall of fame, blue bloods Kansas and Kentucky provided some early season drama in the nightcap of the Champions Classic. Coach Bill Self’s Jayhawks prevailed, 65-61, against John Calipari’s Wildcats in a battle of top-five teams that wasn’t decided until the final minute.