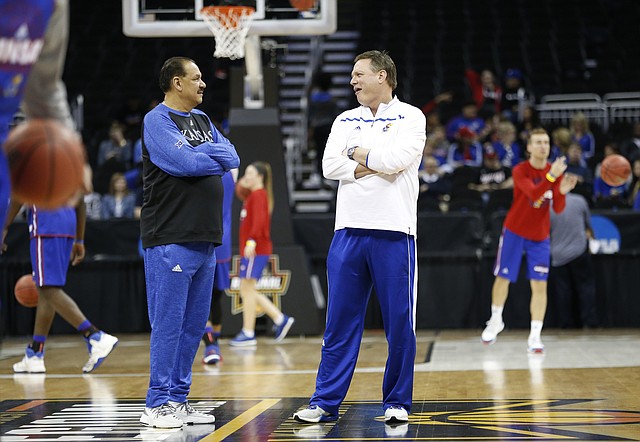 Fort Worth, Texas — Having been a part of the last 469 victories in what is now a 700-win career for Bill Self, Kansas assistant Kurtis Townsend could only smile for his boss following the Jayhawks’ 60-46 win over TCU on Saturday. By Matt Tait

'If that's what it takes': KU assistant coach taped by feds discussing recruit's demand for cash

A phone conversation in which University of Kansas assistant basketball coach Kurtis Townsend and former amateur coach Merl Code discussed a high-profile player’s recruitment was not admitted as evidence in the college basketball corruption trial in which Code is a defendant, but could cause problems for Townsend and the university down the road.

Gene Keady’s coaching offspring will be represented on both benches for the second NCAA Midwest regional played tonight in Sprint Center. By Tom Keegan