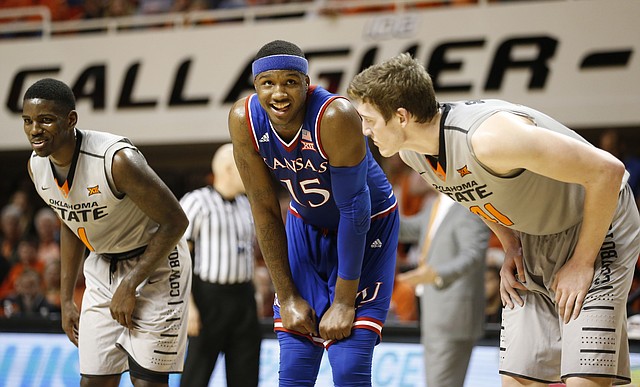 Kansas forward Carlton Bragg Jr. (15) flashes a smile while waiting for a free throw during the first half, Saturday, March 4, 2017 at Gallagher-Iba Arena.

Kansas sophomore forward Carlton Bragg produced six points and five rebounds in 13 minutes off the bench in Friday’s 100-62, first-round NCAA tournament victory against UC Davis. If he can produce in similar fashion against tougher competition on a consistent basis, that can only help Kansas to survive and advance.

To win this one, Kansas needed more than senior Frank Mason III effectively locking up national player-of-the-year honors and Josh Jackson again showing just how much a freshman so driven and talented can improve in every area of his game over the course of a season. This one wasn’t going to be won without a serious contribution from KU’s once-maligned bench. By Tom Keegan