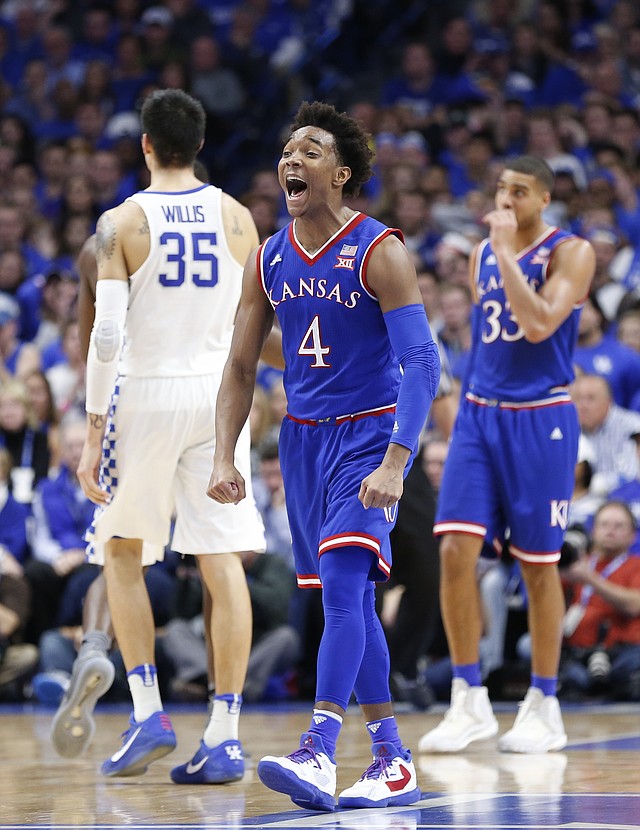 Kansas guard Devonte' Graham (4) turns to the bench with excitement as the Jayhawks pulls away during the second half against Kentucky, Saturday, Jan. 28, 2017 at Rupp Arena in Lexington, Kentucky.

Three years ago today, Kansas guard Devonte’ Graham was released from his scholarship at Appalachian State, which paved the way for him to come to Kansas. Sunday afternoon, via an enthusiastic message via Twitter, Graham announced that he would maximize his time as a Jayhawk and return for his senior season. By Matt Tait

A rare loss and a massive road victory added up to Kansas dropping just one spot in the latest Associated Press college basketball poll.

The games-played experience factor in the starting lineups favored Kansas, 426-132, and the second-ranked Jayhawks used every bit of wisdom at their disposal to knock off No. 4 Kentucky, 79-73, in the featured game of the fourth annual SEC/Big 12 Challenge Saturday night at Rupp Arena. By Matt Tait