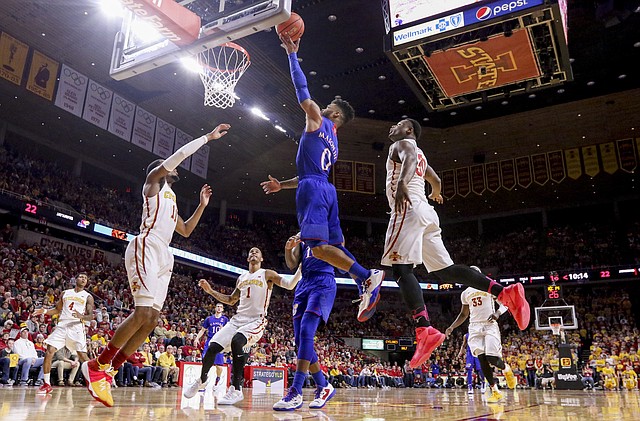 Kansas guard Frank Mason III (0) gets in for a bucket past Iowa State guard Deonte Burton (30) during the first half, Monday, Jan. 16, 2017 at Hilton Coliseum.

A look at some of the keys for third-ranked Kansas in Saturday's rematch with Iowa State at Allen Fieldhouse. By Matt Tait

Kansas coach Bill Self on Thursday said that senior point guard Frank Mason III was doing fine after tweaking his knee during Monday’s win over Iowa State and was not expected to miss any time, including practice. By Matt Tait

Monday night, in a match-up pitting the Big 12 preseason player of the year against arguably the best player in all of college basketball so far this season, Kansas senior Frank Mason III helped his team out-duel Iowa State’s Monte Morris at Hilton Coliseum in a 76-72. By Matt Tait