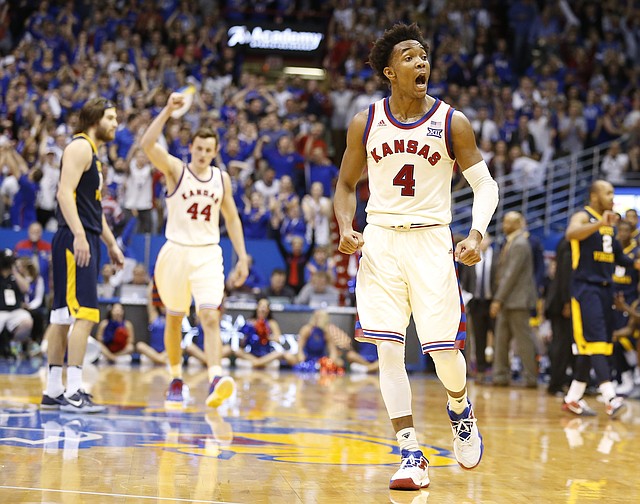 Kansas guard Devonte' Graham (4) gets fired up as the Jayhawks close in on the West Virginia lead during the second half, Monday, Feb. 13, 2017 at Allen Fieldhouse.

Tom Keegan: Stealth weapons have a way of resurfacing in March

The NCAA tournament has a way of bringing on flashbacks of regular-season moments that stood out as different, went back under the radar, and resurface in March to enable a team to survive and advance. By Tom Keegan

Five key questions for the Kansas men’s basketball team entering the 2017 postseason, which begins next week in a to-be-determined location and ends whenever a team does to Kansas what only four squads were able to do all season or the Jayhawks cut down the nets in Arizona. By Matt Tait

A pair of victories over top-10 teams this past week didn’t nudge Kansas into one of the top two spots in the latest Associated Press college basketball poll, released Monday.