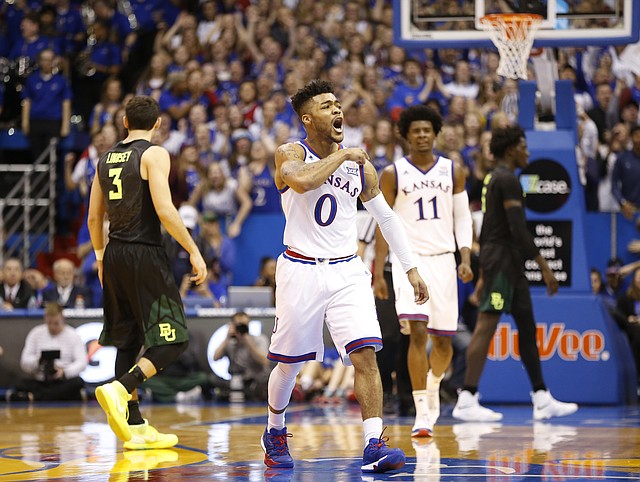 A season that began with high hopes, huge non-conference showdowns and a quest for a 13th consecutive Big 12 Conference title, moved into the postseason on Sunday with the Kansas men’s basketball team earning the No. 1 seed in the Midwest Region of the 2017 NCAA Tournament. By Matt Tait

Thirteen proved to be quite lucky this season for the Kansas men’s basketball team, which not only racked up a 13th-consecutive Big 12 Conference regular season title but did so on the strength of some extra hardware. By Matt Tait

About 30 minutes after the third-ranked Jayhawks secured a 73-68 victory on Wednesday night over No. 2 Baylor at Allen Fieldhouse, junior guard Devonte’ Graham found himself laughing while thinking back to a question posed by KU coach Bill Self to his team a couple of weeks ago. “It’s funny, because coach asked us if we would rather be down two with the ball or up two and have to get a stop (to win),” Graham began. By Matt Tait