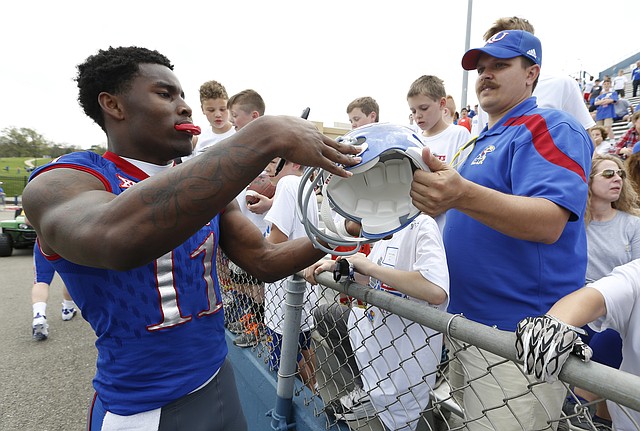 With no spring game, Jayhawks hope to find other ways to 'put on a show' at open practice

In lieu of a traditional spring game Saturday at David Booth Kansas Memorial Stadium, the Jayhawks will close their offseason practice schedule with, well, a typical practice. Fourth-year head coach David Beaty deemed the injuries along the team’s offensive line too plentiful to go through with a scrimmage. One might theorize, though, another motive led to the decision. By Benton Smith

KU football will have open practice instead of traditional spring game

Don’t show up at the newly christened David Booth Kansas Memorial Stadium on April 28 expecting to see a football game. By Benton Smith

University of Kansas football fans can get their first glimpse of the 2018 team on the final Saturday of April, when the Jayhawks will play their annual spring game at Memorial Stadium. By Benton Smith

During the spring football game in April, Kansas safety Mike Lee saw a screen pass developing in front of him around the 15-yard line and his eyes lit up. By Bobby Nightengale