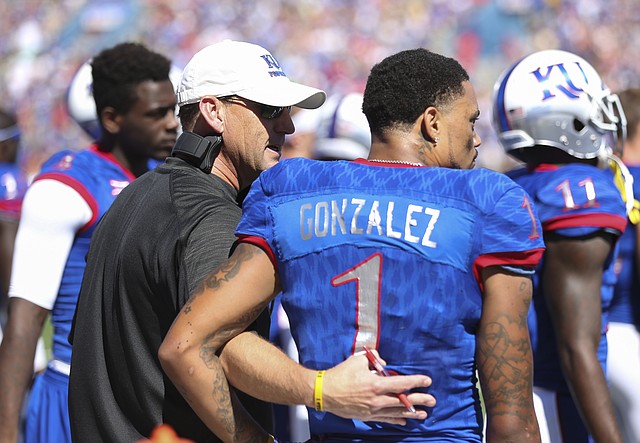 Mistakes won’t cut it for Kansas football on the road against K-State (6-4 overall, 4-3 Big 12). With that in mind, the possibility of a special teams blunder inspired Beaty to make a change on KU’s punt return team. Junior LaQuvionte Gonzalez, who muffed a catch each of the past two weeks and has lost four fumbles on the season, is out. By Benton Smith

Kansas head coach David Beaty has his strengths, but also still shows growing pains. He tends to get so wrapped up in what he sees in practice that he puts too little emphasis on what the rest of us see in games. That’s a particularly dangerous habit to fall into when evaluating players’ ability to perform the two most difficult jobs in football, punt returner and quarterback, in that order.

When David Beaty spoke to his 87-year-old mother, Bobbie Ford, following his Kansas football team’s Saturday home loss to Ohio, she told her son the same thing everyone who watched the game was thinking, too. "Y'all got to hang on to that ball when they punt it to you,” Beaty said of her opening line in their conversation. By Benton Smith

Tom Keegan: Sloppy Jayhawks on the menu at Memorial Stadium

For the second week in a row, Kansas showed it has faster football players than a year ago, but the football they played resulted in a not-so-fast verdict in declaring the Jayhawks a much better football team than when they went 0-12. By Tom Keegan