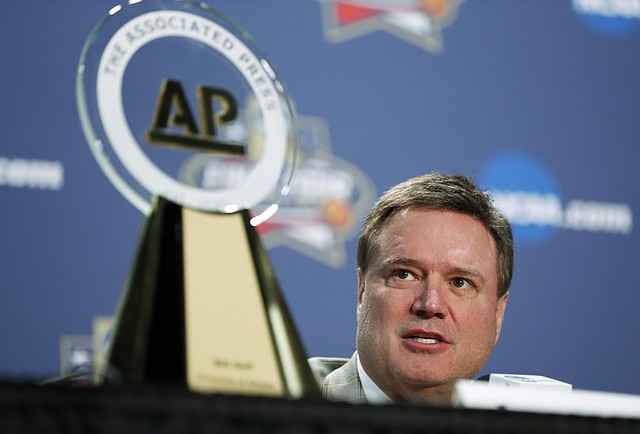 Kansas coach Bill Self answers a question near his Associated Press Coach of the Year trophy at a news conference at the NCAA Final Four college basketball tournament Thursday, March 31, 2016, in Houston. (AP Photo/David J. Phillip)

I invented a mathematical formula to see if I could confirm my suspicion that KU has had the most consistent program in the nation the past 10 completed college basketball seasons.

Kentucky and Kansas University, the two winningest programs in college basketball history with 2,205 and 2,186 victories respectively, will meet for the second straight season in the SEC/Big 12 Challenge, the two conferences announced Tuesday.

The recent report that the coach-shopping Houston Rockets were “intrigued” by Big 12 bosses Bill Self and Shaka Smart served as a reminder that all good things come to an end. Eventually, although not likely any time soon, Self will probably want to take a crack at coaching the best basketball players on the planet and see if he can join one-time mentor Larry Brown as the only coaches to win NCAA and NBA titles. By Tom Keegan

Kansas University forever appears on the lists of schools McDonald’s All-Americans are considering. That, coupled with Kansas winning the Big 12 every year, creates the sometimes-inaccurate perception that the Jayhawks always have a talent advantage when they take the floor. By Tom Keegan

Bill Self named AP Coach of the Year

Bill Self, who this past season directed Kansas University to its 12th-straight Big 12 championship, the league postseason tourney title for the seventh time (in 13 tries) and a spot in the NCAA Tournament Elite Eight, on Thursday was named Associated Press national coach of the year.