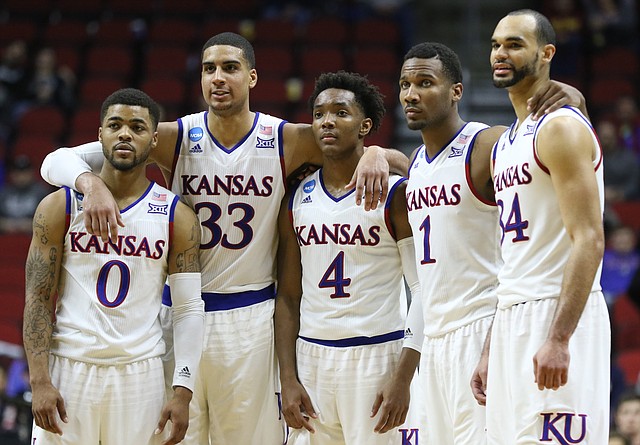 The Kansas starters, Frank Mason III, Landen Lucas, Devonte Graham, Wayne Selden Jr. and Perry Ellis stand arm-in-arm late in the second half as they watch a pair of UConn free throws with the game wrapped up, Saturday, March 19, 2016 at Wells Fargo Arena in Des Moines.

2016 Sports Photos of the Year

For me, without question, most of the images from the playing field that stand out at the end of each year usually aren't the electrifying dunks or the diving touchdowns. Many of them don't even have a ball anywhere in the photo. I think I speak for most photojournalists when I say that the storytelling moments, whether humorous, melancholy, deflating or uplifting are the ones that most of us are looking for.

For the first time in four years, the Kansas men’s basketball program enters a season with the distinct possibility that its opening-night lineup could start nearly every game of the season. By Matt Tait

The answer to what happened to Kansas University in the NCAA basketball tournament as in what went wrong elicits a very easy four-word response: Villanova happened, that’s what.

Give me a dollar for every time Kansas University basketball coach Bill Self has said he doesn’t care who starts, just who finishes games, and I’ll give you a wardrobe worthy of Villanova coach Jay Wright, plus a few threads, on a daily basis.