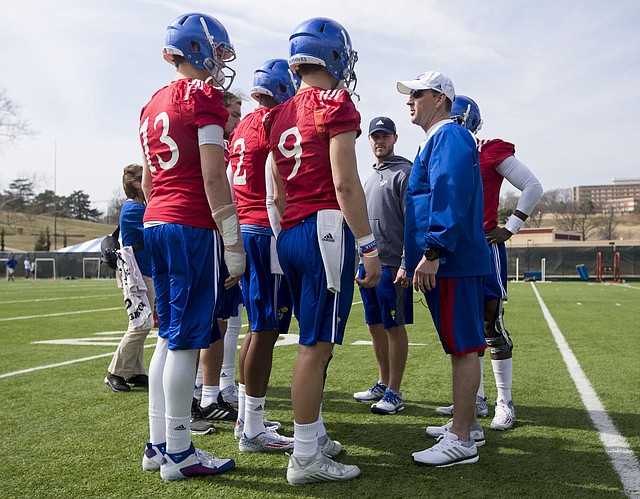 Kansas coach David Beaty meets with his quarterbacks during the first day of spring practice on Sunday, March 6, 2016, at the practice fields north of Memorial Stadium.

Through his travels up the football coaching ranks, few obligations invigorated KU's David Beaty as much as calling plays for his team’s offense. When he took over as offensive coordinator at Rice, the program experienced significant gains in some key statistical categories. By Benton Smith

I noticed recently that the Kansas University football coaching staff had extended a scholarship offer to Class of 2018 pro-style quarterback Cammon Cooper, a 6-foot-4, 185-pound Utah prospect who already is receiving interest from several big-time programs.

The verdict is in, and the bottom line has not changed. For the second year in a row, the folks in Las Vegas do not seem to have much faith in Kansas University football. By Matt Tait

Coming off an 0-12 season and heading into one that will feature the smallest home crowds in decades, the Kansas University football program didn’t have much chance to generate any interest from the first day of spring practices. Wrong! By Tom Keegan