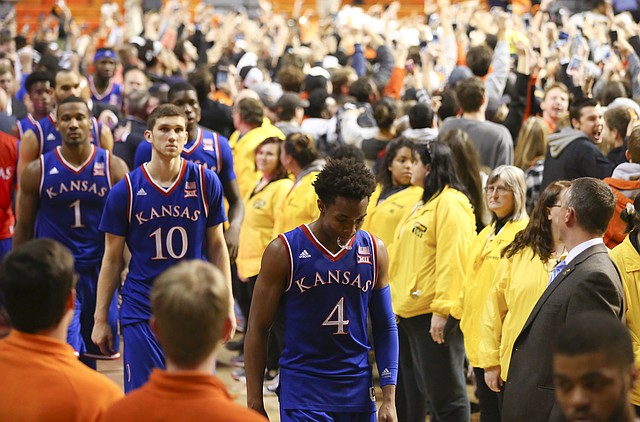 Kansas guard Devonte' Graham and the rest of the Jayhawks leave the floor following their 86-67 loss to Oklahoma State on Tuesday, Jan. 19, 2016 at Gallagher-Iba Arena in Stillwater, Okla.

Second wind: KU gets another shot at OSU

Devonté Graham is well aware that his 27-point outing and sticky defensive performance on Buddy Hield — as well as the Jayhawks’ 76-72 victory over Oklahoma — won’t mean anything if KU fails to take care of business Monday against Oklahoma State. By Gary Bedore

Kansas University’s basketball players have done some soul-searching in the wake of Tuesday’s 19-point road loss to an Oklahoma State team that entered with a 1-4 league record. The squad’s upperclassmen led a players-only meeting Wednesday in the players’ locker room in Allen Fieldhouse. By Gary Bedore

A reporter asked Kansas University basketball coach Bill Self if he could pinpoint a “common denominator” in the Jayhawks’ three consecutive losses at Self’s alma mater, Oklahoma State. “Yeah, me,” KU’s 13th-year coach said after the No. 3-ranked (15-3, 4-2) Jayhawks’ 86-67 blowout loss to (10-8, 2-4) OSU on Tuesday night. By Gary Bedore