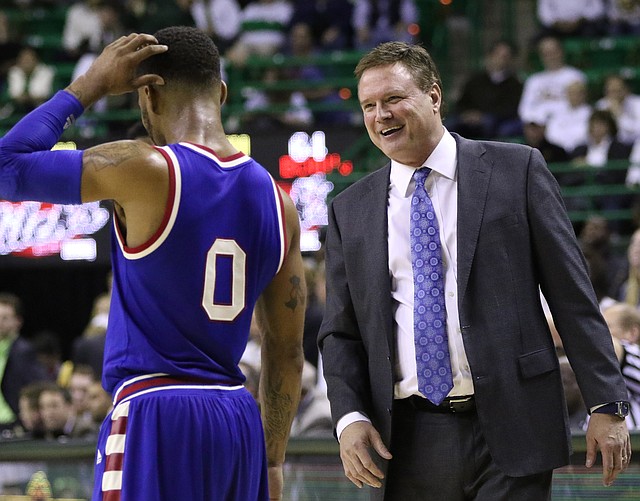 KU coach Bill Self discusses transition from heartbreaker vs. Villanova to hope for 2016-17

Kansas basketball coach Bill Self on Monday joined CBS Sports’ Jon Rothstein for 15 minutes on his regular weekly college basketball podcast and covered a variety of topics from the Jayhawks’ Big 12 title streak to losing to Villanova last year and entering the 2016-17 season with a team that’s good enough to extend the streak and make some noise in March. By Matt Tait

Jayhawks looking to make it a dozen in a row

If Kansas University’s No. 2-ranked basketball team, which has won eight consecutive games, today is able to defeat a Texas Tech squad that has won five in a row and six of seven, the Jayhawks will be crowned Big 12 champs for the 12th-straight season.

Self: Three players obvious for All-Big 12

In about a week and a half, Bill Self and nine other Big 12 head basketball coaches will submit their all-conference picks to the league office.

Kansas University coach Bill Self was furious at halftime Tuesday of what turned out to be a 66-60 road win at Baylor. By Gary Bedore