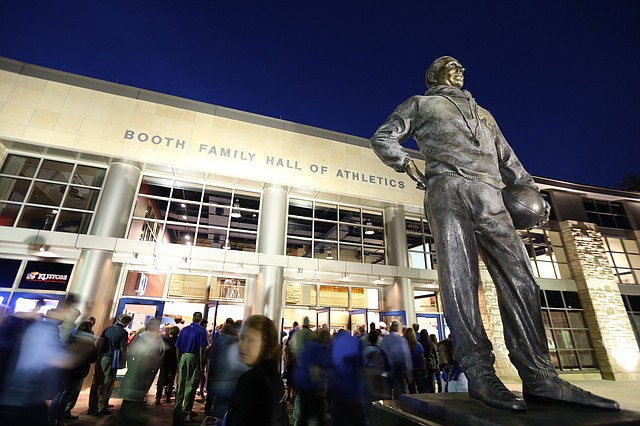 A ticket broker’s lawsuit seeking to keep confidential the details of its agreement with Kansas Athletics Inc. is set to go to trial before a judge next year.

Seven University of Kansas teams achieved perfect 1,000 single-year Academic Progress Rate scores, and KU’s women’s cross country team picked up a Public Recognition Award for scoring in the top 10 percent of its sport over the course of multiple years the NCAA announced on Wednesday.

University of Kansas basketball coach Bill Self, shortly after KU’s annual media day Wednesday, declined to comment on the testimony of former AAU coach T.J. Gassnola regarding his relationship with Kansas.

KU Athletics budget will increase to $93.3 million next year

University of Kansas Athletics expects its budget to increase to $93.3 million next year.

A lot of University of Kansas men's basketball fans are walking a little farther and paying a little more to reach Allen Fieldhouse this season, prompted by ongoing construction and increasing demand for parking. The shuttle bus from park-and-ride lots to Allen Fieldhouse is no longer free, and it drops off riders farther away than previous years. Also, some Williams Fund donors' assigned lots are now farther away.

What if Kansas paid its basketball players? It already does, sort of

From cost-of-attendance stipends to what comes next

If you want to be a Kansas basketball player, 82 is an important number to know. It’s how many games are in an NBA season. It’s also how many times more money KU coach Bill Self made than his 13 men’s basketball scholarship athletes last year. This may seem unbelievable, but it’s true: Self earned more than $3.9 million, while the 13 players on scholarship took home $47,372 combined. The unbelievable part is that the players were paid at all.

The NCAA revealed Wednesday that Kansas University tied an athletic department record with six teams scoring a perfect APR score of 1,000 for the 2014-15 school year. By Matt Tait