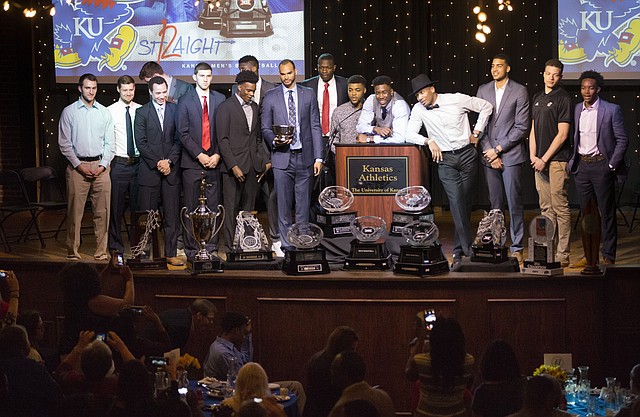 Members of the 2015-16 Kansas basketball team gather for a photo before a line-up of trophies amassed during their collective years, at the end of the basketball banquet on Wednesday, April 13, 2016 at Abe and Jake's Landing.

Bill Self stood behind a podium on the stage at Abe and Jake’s Landing on Wednesday night and told several hundred Kansas University basketball banquet-goers that he “knew what the situation would be with all our returning guys with the exception of one player.” That individual — freshman forward Carlton Bragg, who had been considering a jump to the pros since the end of the season on March 26 — took care of any remaining uncertainty by yelling from his seat, “I’m coming back.” By Gary Bedore

Glad to see Greene really dressed up for the occasion.....