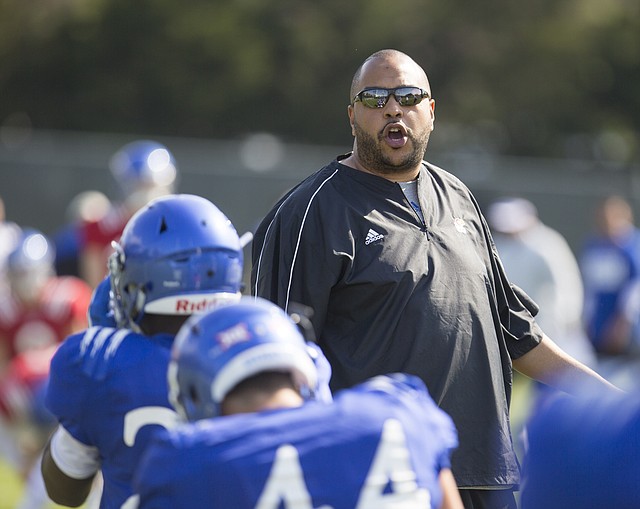 When a football program such as Kansas — which hasn’t posted a winning record in eight seasons or won more than three games in seven — starts landing commitments from four-star prospects and appearing on national top-10 lists dedicated to recruiting success, those following the sport can’t help but wonder how something like that occurs. As a result, the college football nation is getting an informal introduction to second-year KU running backs coach Tony Hull. By Benton Smith

The Kansas athletic department made another serious commitment to improving its football program Tuesday when it more than doubled the salary of running backs coach and standout recruiter Tony Hull, who also received a new title.

Kansas, of all places, is fast becoming a popular destination for college football prospects from the state of Louisiana.

Kansas running backs coach Tony Hull knows that he has a challenge ahead of him as he begins his first season of working at the collegiate level, but it is not a situation that the mild-mannered Louisiana native is nervous about. His first five months on David Beaty's staff have gone smoothly, as he has learned the ins and outs of Big 12 football, while also helping the program make huge recruiting strides in his home state. By Chris Duderstadt

Hull of a hire

During his first four months on the job, Kansas University running-backs coach Tony Hull’s deep connection to his hometown of New Orleans has paid off more quickly than expected for the rebuilding Jayhawks.