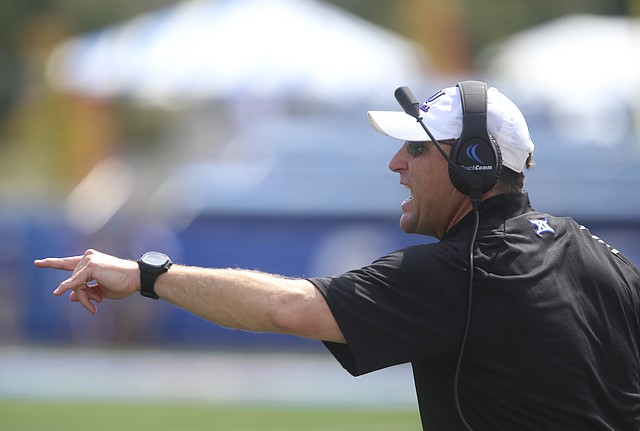 Kansas head coach David Beaty screams at his players during the third quarter on Saturday, Sept. 5, 2015 at Memorial Stadium.

The Journal-World learned Sunday that the Kansas University football program was poised to hire Jason Phillips to join the KU coaching staff as a wide receivers coach. KU coach David Beaty later confirmed the hire in a news release.

KU defense off to rough start

Through two weeks of the 2015 season, the numbers back up what Kansas University football fans have seen with their own eyes — the KU defense is off to a rough start.

All offseason, first-year Kansas University football coach David Beaty drilled into the psyche of his players, assistant coaches and anyone else who would listen the importance of special teams for the Jayhawks’ chances this season.

On Monday morning’s Big 12 football coaches teleconference, Kansas University football coach David Beaty admitted that he pays no mind to the betting lines released each week for the dozens of college football games around the country. Having said that, Beaty, at least for now, also doesn’t mind what they say.By Matt Tait

The often sloppy, never dull season-opener revealed enough to draw three conclusions about David Beaty’s first Kansas University football team as head coach. First, it might not win a game. Second, it won’t ever quit trying, no matter how discouraging the scoreboard. Third, Beaty isn’t going to peer out from under his baseball cap looking for someone to blame. By Tom Keegan