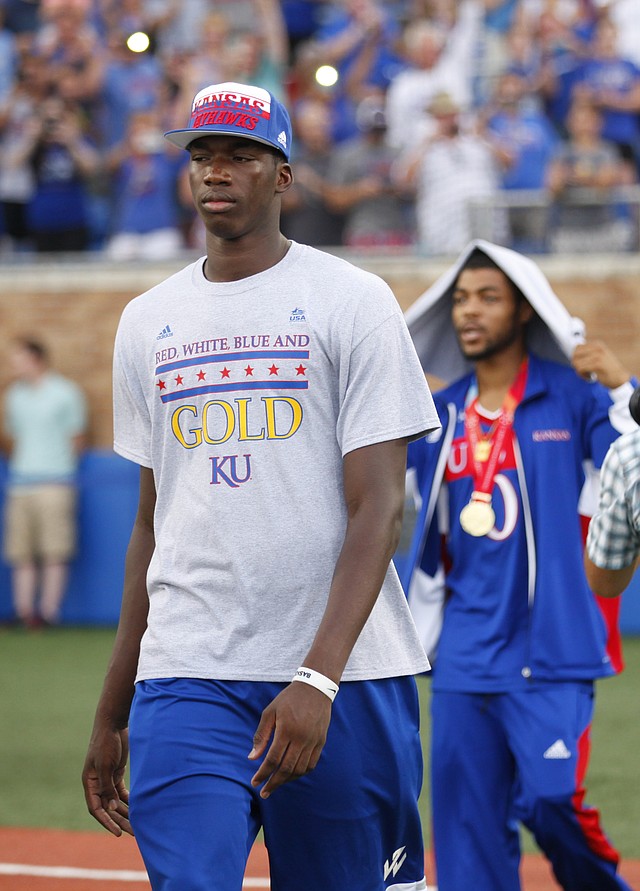 Kansas newcomer Cheick Diallo walks out to the field with his KU teammates as they are honored upon their arrival home after winning the gold medal while representing Team USA during the recent World University Games in South Korea.

Kansas University freshman Cheick Diallo has been named to the 20-member watch list for the 2016 Kareem Abdul-Jabbar Center of the Year Award, the Naismith Memorial Basketball Hall of Fame announced Friday.

Diallo permitted to practice, Self says

Kansas University basketball coach Bill Self received a letter from the NCAA on Wednesday that provided at least some good news on Cheick Diallo’s eligibility situation.

Late last month, Bill Self said he didn’t expect to hear anything conclusive from the NCAA Eligibility Center about prize recruit Cheick Diallo’s eligibility for the upcoming season until mid-September, “at the earliest.” So it’s too early to panic, but not premature to wonder what Kansas University’s experienced basketball team might look like with and without the 6-foot-9, 220-pound freshman from Kayes, Mali, Africa. By Tom Keegan

Kansas University freshman forward Cheick Diallo is listed No. 12 and shooting guard Sviatoslav Mykhailiuk No. 17 overall on ESPN analyst Chad Ford’s first Big Board for the 2016 NBA Draft. The Big Board is essentially a ranking of the top 30 prospects expected to enter the draft. By Gary Bedore