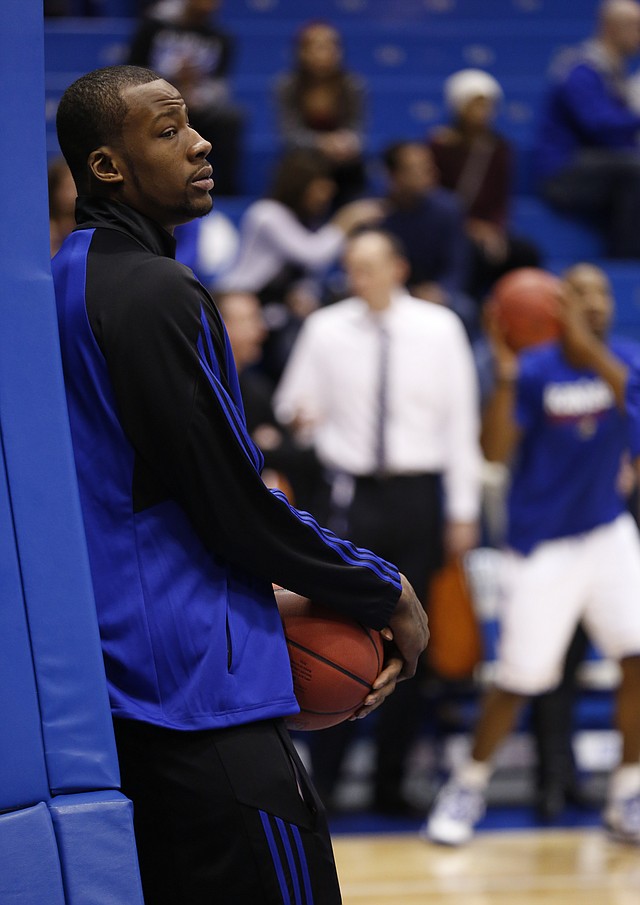 Kansas forward Cliff Alexander watches warmups on Saturday, Feb. 28, 2015 at Allen Fieldhouse. Kansas University officials announced that Alexander will not play against Texas after they were alerted to a potential eligibility issue involving Alexander by the NCAA.

Cliff Alexander hopes to make up for lost time

NBA scouts and front-office personnel didn’t get to see much of Cliff Alexander in his one season at Kansas University. As a result, the 6-foot-8 1⁄2 power forward from Chicago said during a media session at the Draft Combine he’ll have to prove himself to various teams in the weeks to come. By Benton Smith

Bill Self reiterates nothing has changed with Cliff Alexander

An attorney representing Kansas University freshman forward Cliff Alexander put out a statement on Thursday, before KU’s 64-59 win over TCU at the Big 12 Tournament, indicating the NCAA will not meet with the KU big man until he provides documents that Alexander apparently does not possess.

Bill Self: A negative ruling on Cliff Alexander would keep him out of NCAAs

Kansas University freshman Cliff Alexander did not make the trip to Oklahoma Saturday for the Jayhawks’ 75-73 setback, because of his issue with the NCAA that has been described as a possible extra benefit situation involving an agent and Alexander’s family. Before Saturday’s game, Yahoo!Sports reported that Cliff’s “family” met with agents last August and his mom, Latillia, made a public filing in August tying her to a financial firm. By Gary Bedore

There's been no decision by the NCAA regarding Cliff Alexander's eligibility issue.

Kansas University freshman forward Cliff Alexander sat out Saturday’s game against Texas over a potential NCAA violation. KU athletic director Sheahon Zenger said the NCAA “has alerted us to an issue that could affect Cliff’s eligibility. As a precautionary measure, Cliff will not take the court until we have resolved the issue.” By Gary Bedore

Less than a couple of hours before Kansas University’s men’s basketball Saturday home game against Texas, the school announced one of its starters won’t play.