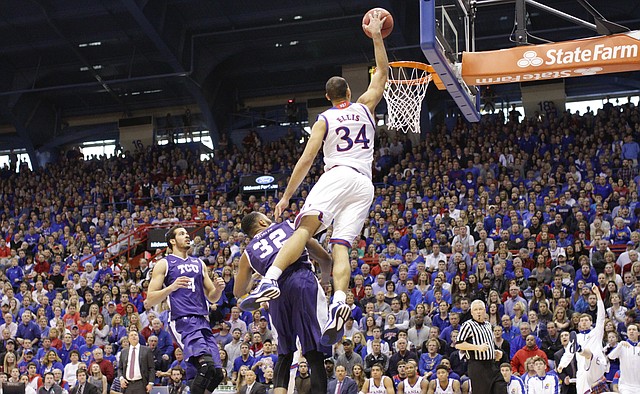 Kansas forward Perry Ellis (34) throws down a dunk off of a lob pass over TCU guard Trey Zeigler (32) during the second half, Saturday, Feb. 21, 2015 at Allen Fieldhouse.

Squeezed out for player of the year, Perry Ellis earns first-team All-Big 12 selection

Not playing in the final game and a half might have hurt Perry Ellis' chances for Big 12 player of the year. But the Kansas University junior did land on the all-Big 12 first team, voted on by the coaches and released by the conference on Sunday.

With one hand, Perry Ellis corralled an alley-oop pass and hammered it through the net. And, upset of all upsets,  the junior forward from Wichita who is so stoic he makes the guards at the Buckingham Palace seem like drama queens by comparison, cracked a smile. By Tom Keegan