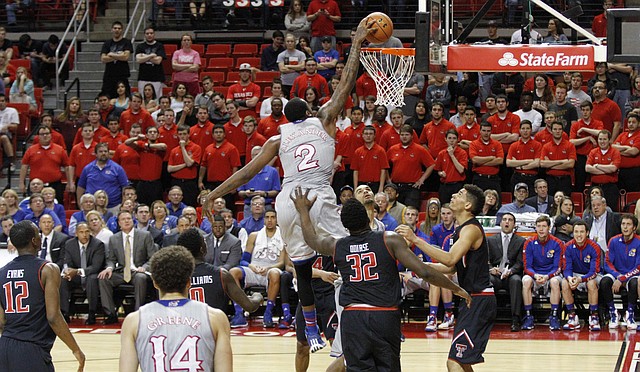 Kansas forward Cliff Alexander (2) dunks during the second half of the Jayhawks 73-51 win over Texas Tech Tuesday, Feb. 10, 2015 at United Supermarkets Arena.

Cliff Alexander’s well-publicized “motor” was revving too fast during the first minute and a half of Tuesday’s Kansas-Texas Tech basketball game in United Supermarkets Arena. But the freshman power forward scored 10 points off 4-of-5 shooting, grabbing five rebounds and blocking four shots while playing 20 minutes in the (20-4, 9-2) Jayhawks’ 73-51 victory over the (12-13, 2-10) Red Raiders. By Gary Bedore