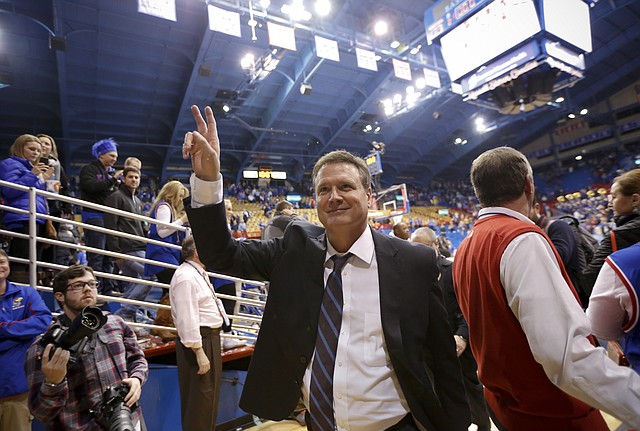 Kansas head coach Bill Self grins as he waves to the fans following the Jayhawks' 89-76 win over Iowa State on Monday, Feb. 2, 2015 at Allen Fieldhouse.

For KU's Bill Self, passion for winning remains the same from win No. 1 to the brink of 600

Before the 2008 national championship, the Big 12 title streak, the 210 wins at Allen Fieldhouse and the 599 career coaching victories at four different stops, there was James Kruse, Earl McClellan and a whole bunch of Oral Roberts Golden Eagles just like them. By Matt Tait

Kansas lands at No. 5 in preseason coaches' poll

The nation’s coaches feel almost as strongly about the 2015-16 Kansas University basketball team as those who make their living in the Big 12 do.

Self sees summer contests as chance to grow

Bill Self has heard about 5,000 tickets have been sold for Kansas University’s two World University Games exhibitions against Canada, set for 7 p.m., tips on June 23 and 26 in Sprint Center in Kansas City, Missouri.

Bill Self has been honored by the Basketball Hall of Fame in Springfield, Massachusetts.

Kansas will face strong schedule in ’15-16

A trip to Hawaii for the Maui Invitational, a Champions Classic clash against Michigan State in Chicago, a road contest versus San Diego State and a home game against a yet-to-be-determined foe in the Big 12/SEC Challenge highlight Kansas University’s 2015-16 nonconference basketball schedule, which was released on Thursday. By Gary Bedore

ESPN’s “GameDay” crew, which plans to air pre-game shows in both Wichita and Lawrence today, forecast snow be darned, definitely will have a lot to talk about prior to the 4 p.m. Kansas University-Texas contest in Allen Fieldhouse.

It’s never too early for college basketball analysts and fans to discuss the NCAA Tournament and Final Four. Thus, ESPN this week asked eight experts to identify 12 teams they would be “least surprised to reach the Final Four.” By Gary Bedore