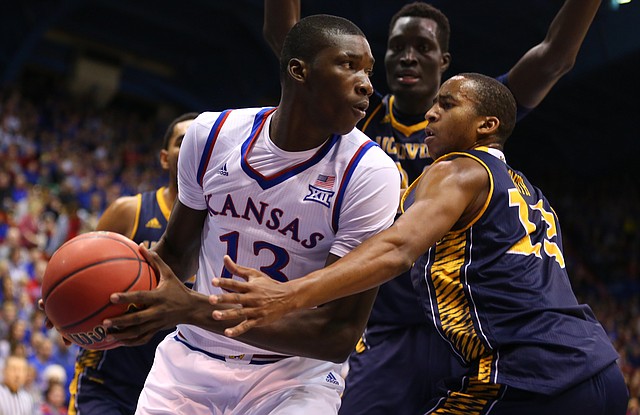 Kansas forward Cheick Diallo (13) looks for an outlet as he is defended by UC Irvine forward Brandon Smith (13) and center Mamadou Ndiaye (34) during the second half, Tuesday, Dec. 29, 2015 at Allen Fieldhouse.

Until Thursday, Silvio De Sousa and Billy Preston were publicly regarded as the only Jayhawks involved in the current NCAA allegations against the University of Kansas. But a section of the NCAA’s response, released by KU on Thursday, indicates that there may have been a third.

Second best: Kansas players shut out of first round

Former Kansas University forward Cheick Diallo, who had been projected as a likely first-round pick in the 2016 NBA Draft, went in the second round, while possible draft picks Wayne Selden Jr., Perry Ellis and Brannen Greene were not selected during Thursday’s proceedings in Brooklyn, N.Y. By Gary Bedore

Diallo conveys thanks to fans

Kansas University freshman Cheick Diallo issued a “thank you” letter in announcing on Twitter on Monday he’d officially decided to sign with an agent and enter the June 23 NBA Draft. By Gary Bedore

Diallo projected to go 26 in draft

ESPN’s Chad Ford has released his latest 2016 NBA Mock Draft, in which six of the top 10 picks are college freshmen. A seventh is 18-year-old Dragen Bender of Croatia.

Monday afternoon, multiple reports from CBS, ESPN and others surfaced on Twitter that said sources had indicated that freshman forward Checik Diallo would declare for the NBA Draft but not hire an agent.

Nobody ever asks why Kansas City Royals star center fielder Lorenzo Cain didn’t become a major league regular until the age of 26, yet so many seem puzzled that Cheick Diallo watches the nation’s top-ranked college basketball team play far more than he plays. By Tom Keegan