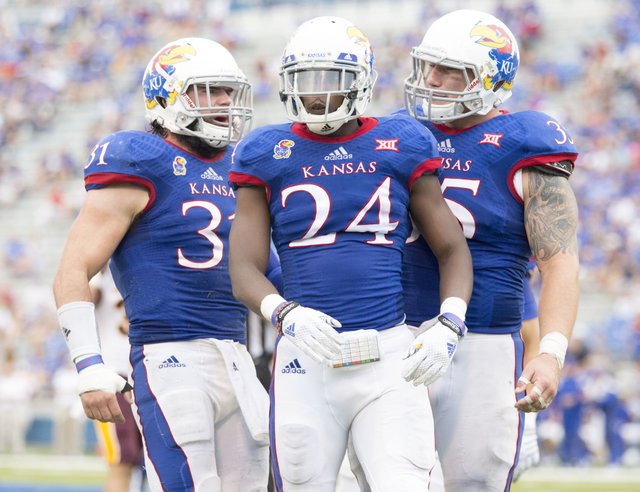 Kansas' Ben Heeney, left, JaCorey Shepherd (24) and T.J. Semke celebrate Shepherd's broke up pass during the second half of their game against Central Michigan Saturday afternoon at Memorial Stadium.

Former Kansas Univeristy linebacker Ben Heeney, who led the Jayhawks in tackles during each of the past three seasons and earned first-team all-Big 12 honors in 2014, and cornerback JaCorey Shepherd, who was among the top corners in the country in passes defended in 2014, on Tuesday, learned that they had received invitations to the annual NFL Scouting Combine. By Matt Tait

Two days after earning a second-team all-Big 12 honor from the Associated Press, Kansas University cornerback JaCorey Shepherd received a promotion of sorts from the league's coaches.

Kansas University senior JaCorey Shepherd has not done all he has to help others in his life for awards. He's done it because he believes it's the right thing to do. That's why the KU cornerback from Mesquite, Texas, who will be playing the last home game of his college career at 2 p.m. Saturday against No. 5 TCU at Memorial Stadium, was shocked to learn he was one of 10 finalists for the 2014 Senior CLASS Award, announced earlier this week. By Matt Tait

GAMEDAY BREAKDOWN: A look at Texas vs. Kansas