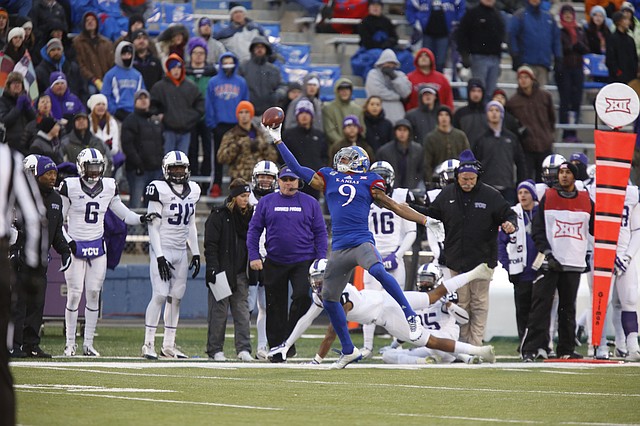 Kansas receiver Nigel King tips a deep pass to himself to keep it in bounds for an eventual touchdown against TCU during the third quarter on Saturday, Nov. 15, 2014 at Memorial Stadium.

The Denver Broncos may be looking to add another former Kansas University football to the three they already have on their roster.

Kansas University junior wide receiver Nigel King told the Journal-World Friday afternoon that he was declaring for the 2015 NFL Draft and would not return to Kansas for his final season of eligibility. By Matt Tait

Jayhawks give scare but fall short against TCU, 34-30

As the final seconds of what was nearly one of the most epic upsets in Kansas University football history ticked away on Saturday at Memorial Stadium, the KU fans who actually showed up to watch it serenaded fifth-ranked TCU with chants of “over-rated,” mocking the Horned Frogs' 34-30 escape over the Jayhawks. By Matt Tait