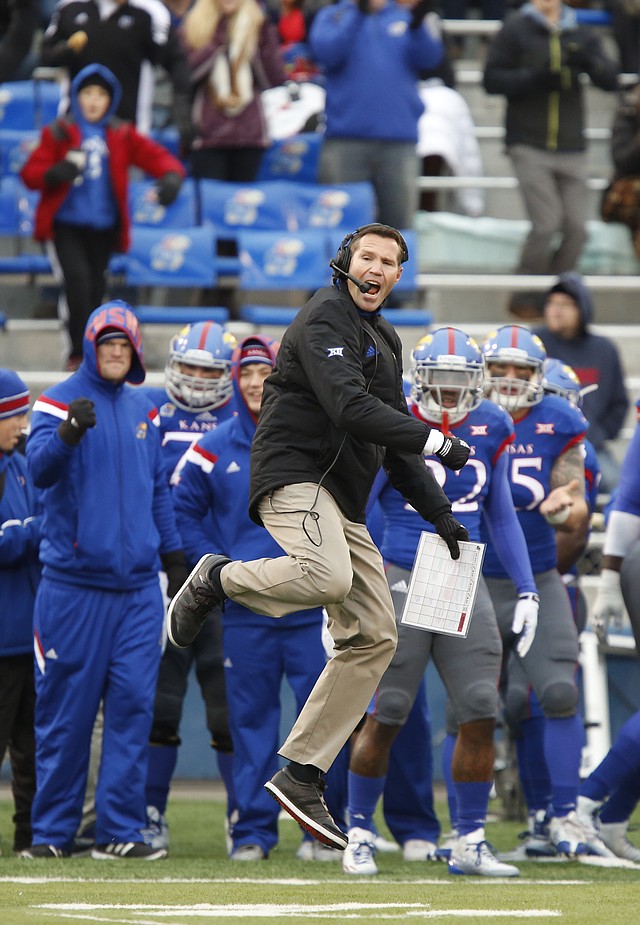 Kansas interim head coach Clint Bowen gets airborne as he celebrates a fourth down stop against TCU during the first quarter on Saturday, Nov. 15, 2014 at Memorial Stadium.

For the past seven weeks — six games and one bye — interim head coach Clint Bowen has deflected all questions about his chances of becoming Kansas University’s permanent football coach in the near future by throwing the praise and focus back onto the players and talking in general terms about establishing a foundation the program can build upon regardless of who’s calling the shots next season.

Last weekend’s near-upset of No. 5 TCU brought renewed hope to a Kansas University football program that has just two games remaining in its season, Saturday at Oklahoma and next week at Kansas State. By Matt Tait

Twitter poll: Should Clint Bowen be the next KU head coach?

The Journal-World’s Gary Bedore was surfing on his computer after deadline and posed a question his Twitter followers: "Do you want Clint Bowen as the next head coach, or do you want to keep looking?"

Six games into his eight-game audition for the permanent head coaching job, Clint Bowen continues to build a strong resume for having the interim tag removed from his title at some point in the near future. By Matt Tait