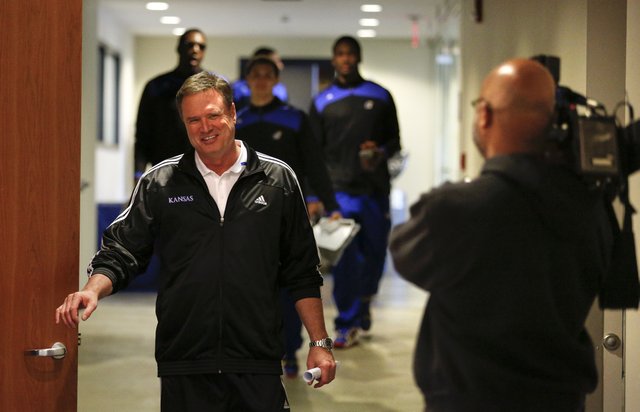 Kansas head coach Bill Self smiles as he walks past a television camera following the NCAA tournament selection show, Sunday, March 16, 2014 at Allen Fieldhouse. Kansas, a No. 2 seed in the South Regional, will face No. 15 seed Eastern Kentucky on Friday in St. Louis.

Self pleased with KU’s No. 2 seed despite tough NCAA regional draw

Kansas University basketball coach Bill Self can make a case for the NCAA Tournament’s South Regional being the toughest of all four in the upcoming Big Dance. "But you just want to win two games this weekend. That’s the focus,” Self said after it was revealed his No. 2-seeded Jayhawks would meet No. 15 seed Eastern Kentucky in a South Regional opener at 3:10 p.m. Friday in St. Louis. By Gary Bedore