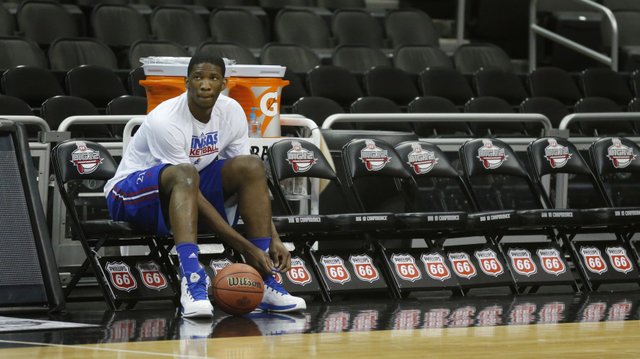 Former Kansas University center Joel Embiid is scheduled to have surgery Friday to repair a stress fracture in his right foot, a stunning development that could affect the top choices in next week's NBA draft.

In most cities, “Hello, how are you?” is the most commonly asked question, although it’s really more of a greeting than a question. Nobody listens to the auto-answer. In Lawrence, it ranks a distant second to the runaway winner: “Why hasn’t Joel Embiid announced his decision yet?” The implied, though not stated, finish to that sentence is, “so that I can get on with my life already.” Column by Tom Keegan

Jayhawks: No change in goals with Embiid out for Big 12 tourney

Injured Kansas University center Joel Embiid spent some of Wednesday's Big 12 tournament practice “jacking around,” according to KU coach Bill Self, but the freshman big man will not play in the tournament. KU will open its postseason with Tarik Black in the starting lineup when the Jayhawks face Oklahoma State at 2 p.m. today. By Gary Bedore