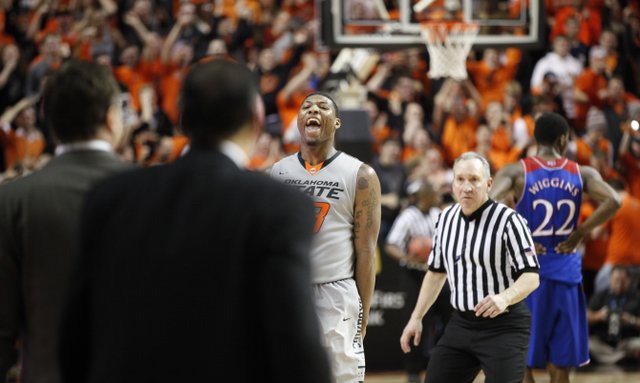 Oklahoma State guard Marcus Smart celebrates before the Kansas bench as the Cowboys close out the game on Saturday, March 1, 2014 at Gallagher-Iba Arena in Stillwater, Oklahoma.

Oklahoma State sophomore guard Marcus Smart caused quite a stir on Saturday night by saying one of the reasons he played so well against Kansas the second half was his desire to keep the Jayhawks from cutting down the nets in Gallagher-Iba Arena. By Gary Bedore

Cowboys soak in excitement of upset victory over Kansas

After thousands of his new closest friends stormed the floor at Gallagher-Iba Arena to celebrate Oklahoma State's 72-65 victory over No. 5 Kansas on Saturday night, OSU senior Markel Brown found himself crowd surfing above the jubilant crowd.By Matt Tait

Bill Self should put this photo on the bulletin board in the KU locker room. Let this image burn into his players' heads if they should have to face OSU in the Big 12 Tournament.