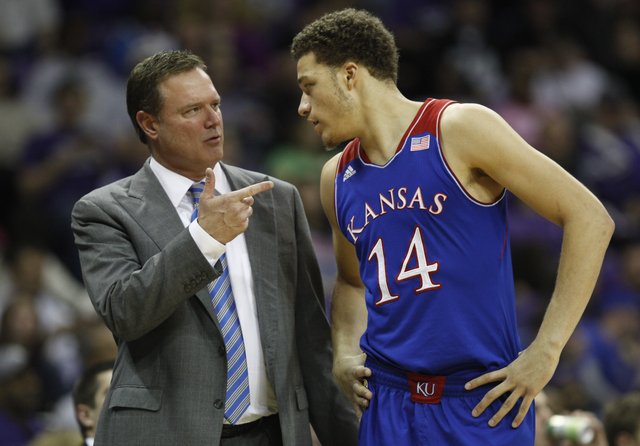 Kansas head coach Bill Self talks with guard Brannen Greene during a break in action against TCU on Saturday, Jan. 25, 2014 at Daniel-Meyer Coliseum in Fort Worth, Texas.

Kansas University basketball coach Bill Self said earlier today on the pregame radio show with Bob Davis that sophomore guard Brannen Greene would not play in today's 3 p.m. game at Oklahoma after Greene was suspended "for being irresponsible."

Brannen Greene didn’t play a lot, in fact, he didn’t crack the regular rotation, during his freshman season at Kansas University. Though that came as somewhat of a surprise to the confident 6-foot-7 wing, he says he never, ever considered fleeing to another school via transfer. By Gary Bedore

Column: Brannen Greene has potential to spark KU in postseason

Talk centers on superstars in advance of big games. But sometimes, a stealth bomber sneaks in below the chatter and swings the contest in favor of his team. It could be anybody and it’s impossible to predict. So I ask myself over and over: Why do I think freshman Brannen Greene could be that guy today? Column by Tom Keegan

Jayhawks move focus to next slice of Big 12 schedule

Off to a 6-0 start in Big 12 Conference play for the third straight season and sixth time in the 11-year Bill Self era, Kansas University’s basketball team now moves on to the next portion of the 18-game schedule. By Gary Bedore