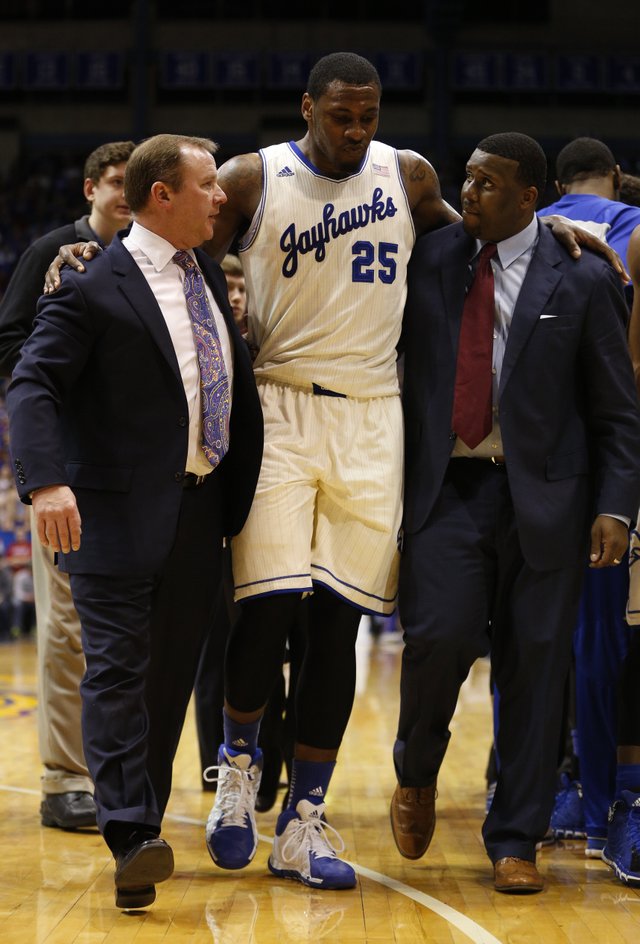 Kansas forward Tarik Black is helped off the court by assistant coach Jerrance Howard, right, and trainer Bill Cowgill after sustaining an injury during the second half on Monday, Jan. 20, 2014 at Allen Fieldhouse.

Kansas University men’s basketball assistant coach Jerrance Howard will serve a two-week suspension from all team activities as punishment for a July 2014 arrest for possession of marajuana, KU coach Bill Self announced Thursday afternoon. The suspension is effective immediately.

Jerrance Howard, who played for Bill Self at the University of Illinois, now knows what it’s like to work for his former coach. “Unbelievable,” the 33-year-old Howard said of his first season on Self’s Kansas University basketball staff. By Gary Bedore

KU’s Black feeling the love, and feeling better, after sprain

Silence gripped Allen Fieldhouse on Monday night as Kansas University senior forward Tarik Black sat on the floor, wincing in pain after spraining his right ankle in a victory over Baylor. Black, who said he appreciated the love and concern from fans, was able to practice in non-contact drills on Thursday and is expected to play in Saturday’s contest at TCU. By Gary Bedore

Self: KU forward Tarik Black should be fine

Kansas University basketball coach Bill Self said after Monday's 78-68 victory over Baylor that senior forward Tarik Black sustained a sprained ankle and was expected to be fine.