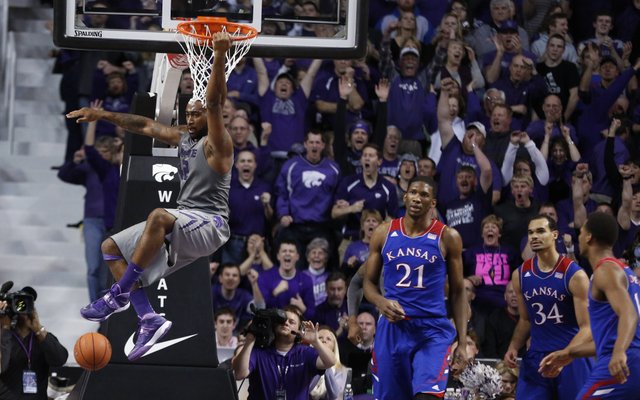 Kansas State forward Thomas Gipson comes down from a dunk before Kansas players Joel Embiid, left, Perry Ellis and Wayne Selden during the second half on Monday, Feb. 10, 2014 at Bramlage Coliseum.

Self: KU center Joel Embiid out vs. TCU

Kansas University basketball coach Bill Self said after Friday's practice that injured freshman Joel Embiid would not play Saturday at 3 p.m. against TCU at Allen Fieldhouse.

Self: Injured Embiid shut down for days, at least

Rest and rehab is ahead for Kansas University freshman Joel Embiid for at least the next couple days as the 7-footer recovers from an aching knee and sore back. “He definitely will not practice. The earliest he’d practice is Friday,” KU coach Bill Self said Tuesday night. “We don’t know yet. We’ll see how he feels day to day,” Self added, asked if Embiid would play in Saturday’s 3 p.m., home game against TCU. By Gary Bedore