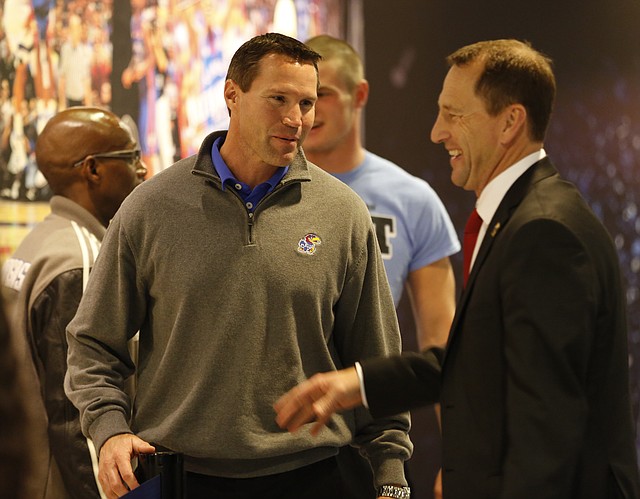 Defensive coordinator Clint Bowen, left, laughs with newly-hired Kansas head football coach David Beaty before Beaty is introduced to the Allen Fieldhouse crowd during halftime of the JayhawksÕ game against Floriday on Friday, Dec. 5, 2014. Beaty is the 38th head coach in the programÕs history.

David Beaty says he was KU-bound, even if not named head coach

When David Beaty claims he would’ve worked on the Kansas football staff this season, even if he hadn’t been hired as head coach, the statement carries some weight. By Benton Smith

As we wait for Kansas University football coach David Beaty to fill out his coaching staff, a quick glance at a lesson from Beaty’s past provides a hint for the direction in which he might be going. By Matt Tait

KU gets its coach

Six days after the official end of the 2014 Kansas University football season, the program took its first step at yet another rebuilding attempt, when former KU assistant David Beaty accepted an offer to become the 38th head football coach in KU history. By Matt Tait

Self happy for Beaty, Bowen

Ask Bill Self about another member of the athletic department, and out pops a perfect teammate answer. Self’s words about new football coach David Beaty had to make Beaty feel as welcome as the big hug associate head coach/defensive coordinator Clint Bowen pinned on his old friend/new boss before Beaty took the court. By Tom Keegan