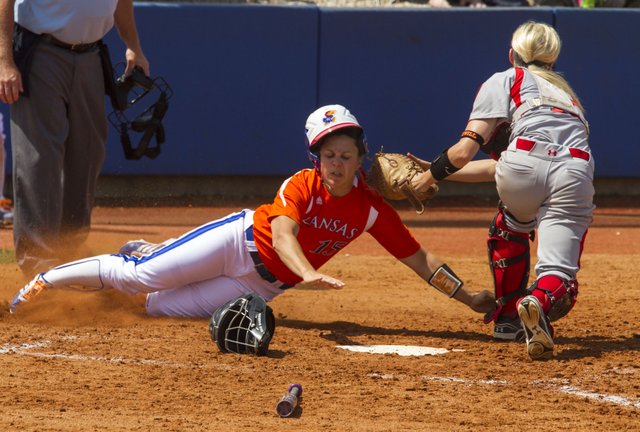 Kansas senior Nikki Bruce (15) has her batting helmet knocked crooked as she is tagged out at home plate by Texas Tech catcher Kady Crow during their game Saturday afternoon at Arrocha Ballpark. The Jayhawks traded their traditional blue and white uniforms for orange as part of the "Jayhawks for a cure" game in order show support for finding a cure for kidney cancer. The game is played in honor of Kansas head coach Megan Smith's husband, Paul Buske, who passed away from kidney cancer in 2011.

In the hours leading up to the Kansas University softball team’s series finale with Texas Tech on Saturday, 6-year-old Cooper Smith Buske took the field at Arrocha Ballpark and threw strike after strike as he got ready. By Benton Smith