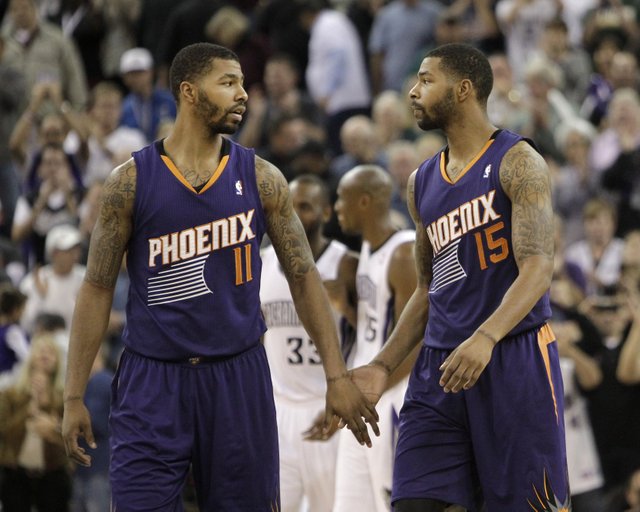 Phoenix Suns' Markieff Morris, left, shakes hands with his twin brother Marcus, as they walk off the court after the Suns 107-104 loss to the Sacramento King in a NBA basketball game in Sacramento, Calif., Tuesday, Nov. 19, 2013.(AP Photo/Rich Pedroncelli)

The Morris twins — Markieff and Marcus, who both like to talk — figure to be stars of their Media Day festivities today in NBA cities Phoenix and Detroit, respectively. By Gary Bedore

Former Kansas University power forward Markieff Morris of the Phoenix Suns on Tuesday was fined $10,000 by the NBA league office for publicly demanding to be traded. By Gary Bedore

Report: Morris twins under investigation for role in alleged assault

Former Kansas University basketball standouts and current Phoenix Suns teammates in the NBA, twin brothers Marcus and Markieff Morris are being investigated by Phoenix police for their part in an alleged assault, according to a report.