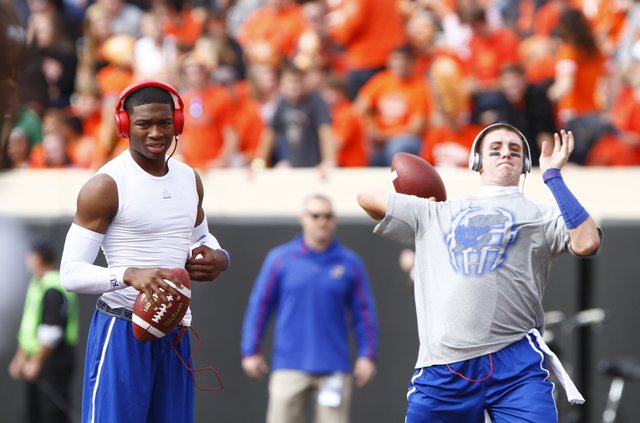 Kansas quarterbacks Montell Cozart, left, and Jake Heaps warm up prior to kickoff against Oklahoma State on Saturday, Nov. 9, 2013 at Boone Pickens Stadium in Stillwater, Oklahoma.

When the Kansas University football team hit the field Tuesday for the sixth of 15 spring practices, it did so with the knowledge that 2013 starting quarterback Jake Heaps would sit out a significant portion of the competitive drills. By Matt Tait

It’s back to the drawing board for Kansas University’s football team as it prepares for Saturday’s 11 a.m. season finale against Kansas State at Memorial Stadium. By Matt Tait

Saturday night, following Kansas' 42-6 loss at Oklahoma State — the Jayhawks’ sixth straight setback this season and 27th consecutive Big 12 defeat — coach Charlie Weis indicated it might be time to lean either toward Montell Cozart or Jake Heaps for most of the snaps at quarterback. By Matt Tait