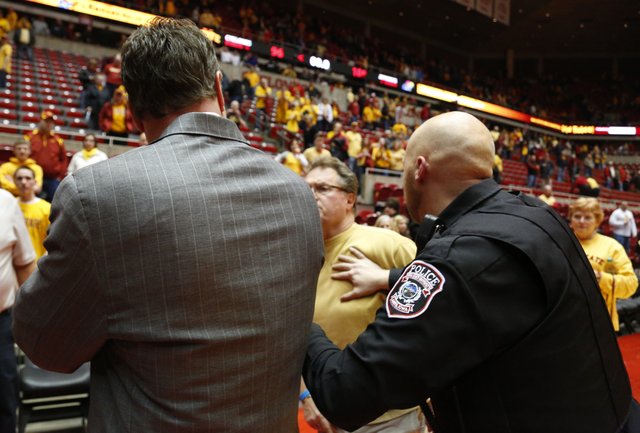 Nick, what was the guy saying? Was he p/o about the dunk?

Looks like a tough guy who was high on pork rinds.

Yeah, and right after the game Elijah apologized . He explained that he was caught up in the moment and should have showed more sportsmanship and just dribbled it out. His words : "I saw an open basket and just drove it because I had been doing it all night." I know you wouldn't understand him getting caught up in the moment considering you probably haven't played a meaningful minute of sports in your life.

I also love that you created an account on a KU sports website just to whine about getting beat.

Nongrad? - care to explain yourself troll? If you mean he hasn't graduated neither have 99% of players in D1 basketball - graduation is in May

And the ESPN announcers spent the entire broadcast boasting about the good fans in Ames and Hilton, at one point describing them as among the nicest in all of college sports? The boos and this character would seem to contradict all of that positive hype that Ames and ISU got during the televised game. The end of game dunk was very uncharacteristic of a Bill Self team but with the season he has had, who could blame Elijah for doing what he did--and he was gracious in apologizing. Fortunately, there are sane and balanced folks in Iowa. Bryce Miller has a very balanced story in today's Des Moines Register online.

Not all of us are. Those kind of drunk idiots make us look bad.

hahahhahahahhahahha - What a piece of work. I wonder if the kid crying was his grandson?

The kid crying was the coach's son. Really classy to make fun of a child crying.

Idiots Out Walking Around

When did playing from the tip to the buzzer become such a crime? If a player wants to dribble out the clock, that's his prerogative. I don't think a player deserves to be skewered for playing until the end.

Booster,Money and above the law? what a embarrassment to the Alum