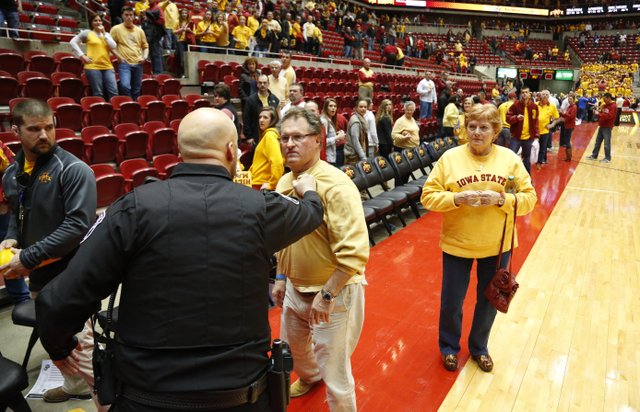 Watch out or he will get his International Harvester out and block the bus.

What a sore loser.

He doesn't got an IH. He's got a Gleaner!

And I've got a new profile pic!

Someone should direct that fan to Sam Villeareal so he can chill out. http://www2.ljworld.com/news/2012/jun...

I think HCBS could take him

The guy looks like one of the citizens in the movie IDEOCRACY, what a loser. Seriously this guy needs a reality check if he takes a game that serious. Go show that kind of passion to a politician, not a coach of a GAME.

After tonights game, I've officially lost all respect for ISU. Bunch of classless fans up there in Ames. They can be the next "Mizzou" far as I'm concerned!

Wow, what a ridiculous post! I will admit that this guy has no business being on the floor, for any reason; but you see a picture and you label all ISU fans based on that? You have no idea what provoked him. When I look at the picture, I see several fans in the background looking past the police officer and the guy on the floor... makes me wonder what the rest of the story was. Either way, I'm sure that no Jayhawk fan has ever acted like this... ;) It's easy to be a good sport when you win the game, but don't pretend you are different or better than anybody else when you lose. Again, no excuse for this guy, but around 16,000 other people enjoyed the game and then went home. Hopefully we'll get you in the Big 12 Tournament!!

You've posted this twice and you're whining.

noman, Cut the old man some slack... He could be one of the player's grandpa and had a need to share a few words with Self. No harm done. Just as EJ was caught up in the moment to dunk when ISU players gave up, this grandpa who appears to do no real harm could also be caught up in the moment. Let's not judge or condemn without knowing one's heart. We are Jayhawks, show others how - with respect.

Good game ISU94, and we look forward to our next matchup - in 2013-14, not in the tourney if I had a say because no team will lose 3x in a row to a same team. Remember Baylor last year?

KU also beat Ohio St 3 in a row. twice last year, once with and once without Sullinger, and again this year at OSU. So yeah a team can beat another 3 times in a row.

I bet the guy's family is sooooo proud!

Even though I am no Cyclone fan, I'd have to say that this classless act by the ISU fan is no worse than Johnson's dunk at the end of the game. It wasn't needed, and had the refs not decided the game for KU at the end of regulation, Self wouldn't be celebrating his 500th win. I'm sure Bill will send a nice thank you gift to the referees.

Ya, I'm sure he will send a thank you gift to the referees who were pretty one sided for 3/4 of the game. Makes a lot of sense. Ridiculous.

Are you seriously saying that a fan trying to get at the coach is the same as a player LEGALLY dunking the ball at the end of the game? Are you seriously that delusional? Yes, Elijah dunking the ball was poor sportsmanship, but if you watched the interview at the end of the game Elijah even said that he was caught up in the moment and should have just dribbled that ball out. He knew what he did was wrong.Also, as far as the refs, Iowa got 80% of the calls throughout the game. Just look at the garbage calls that were called on Withey. The bogus call on the screen, the foul on Withey swatting the air going for a block, and the charge call. Kansas rightfully and deservedly won the game.

Witheys first foul was balony. However, he did foul Niang when he went for the reverse layup. However, EJ ran that guy over at the end, should have been a charge. If it's not a charge I can understand that but then they called a reach on Niang when he and EJ were fighting for it, that was a BS call for sure. We'll take it but if they aren't going to call the charge then you can't call that reach. That being said EJ did get the ball to Naadir and he had a wide open 3 for the victory.

Yes, because a legal dunk in a basketball game is equal to a fan charging a coach on the court and having to be retrained by police. . . right. Get a clue.

Charging up to the KU head coach is equal to EJ getting a little caught up in celebrating a win? Hardly.

Bill Self is correct in saying that if you are going to review bad calls you've got to review ALL OF THEM from the opening tip forward. And any unbiased person watching that game knows ISU got the benefit of a lot more dubious calls than KU.

To say the refs decided the game for KU is beyond pathethic. And to pick the username "NotACycloneFan" means you're either a KState fan or a Mizzou fan. Either way KU owns your favorite team and your complaining is ridiculous. Grow up.

What did this dude think he was going to actually to accomplish? Did he really think he'd get anywhere near Bill Self? Idiot.

I guess you didn't see the other photo here, http://www2.kusports.com/photos/galle...

He managed to get just about shoulder to shoulder with coach Self before the cop pushed him back.

I was wondering what everyone was booing about during EJ's postgame interview with Holly...

Yeah, I thought ISU fans had more class. Not that all of their fans are classless, but did they really think the officiating was all in favor of KU? I recall several fouls -- on KU and ISU -- that shouldn't have been called that added to the drama toward the end of the game. Especially Withey's first and third fouls.

Granted, EJ shouldn't have dunked it at the end, but throwing stuff at players? Come on.

ISU has classy fans. A few of them (this guy included) got caught up emotionally and did some stupid things like throwing stuff and trying to come onto the court. But that's why there are police down there, to make sure things like this don't escalate.

Oh god and the guy's poor wife looking on

I bet the wife was instigating.

Sorry, you can't claim to be a classy fan-base and throw stuff onto your own court, or allow morons like this guy to charge the opposition coaches. This guy isn't Kansas' problem, he's Iowa State's.

And that's what Brown can do for you!

I'm a Cyclone fan and this guy is an embarrassment. He should be banned from Hilton for life. I sincerely apologize to Bill Self. You guys have a proud program and I'm happy to see you do good. The loss was disappointing, but there is no reason to escalate to violence. I'm absolutely ashamed.

Thanks for the comment, and welcome to the board. I have been to a few football games in Ames and found the ISU fan base to be a classy bunch. Sure, I encountered a few drunk students acting silly - but you can find that just as easily in the parking lots around Kansas Memorial Stadium. Overall, I have had some good experiences at KU-ISU games - including that really cold one a few years ago when the snow flurries were flying.

The "incident" must have gotten pretty loud for it to have gotten the attention of people so far away into the stands, based on the direction in which they were looking. Maybe Hudy needs to shadow HCBS when he leaves the court.

Come on, really. Look at the guys wife. He's just a fan who is really pissed off because he knows the Big 12 will eventually admit they missed a call. Wow, here in Cali we step on egg shells all the time..a lot of folks with no common sense and a lot of causes. But even Bill said he "could take the guy" What is wrong with everyone anymore?

This "crazy old man" has been an executive for UPS, a board member of the ISU Alumni Association, gotten a distinguished service award from them just last month, and is a big donor. (See OP_Jayhawk's link about 7 posts above this one). Banned from Hilton for life? Don't count on it. They may make him apologize to HCBS but that will be it. Too much money at stake.