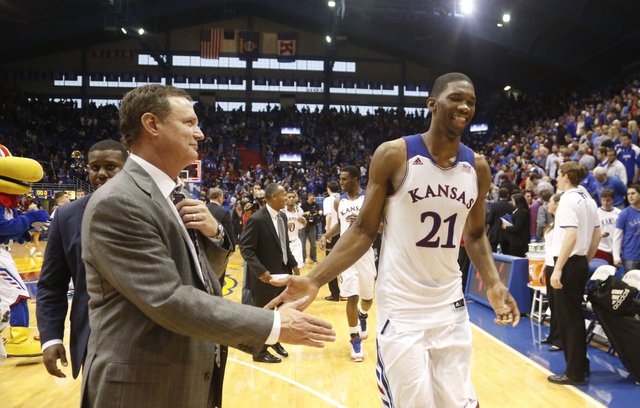 Kansas head coach Bill Self slaps hands with center Joel Embiid as he leaves the court following the Jayhawks' 86-64 win over Georgetown on Saturday, Dec. 21, 2013 at Allen Fieldhouse.

Self optimistic about Embiid’s NBA future

News that former Kansas University center Joel Embiid had successful foot surgery Friday morning certainly brightened the rest of Bill Self’s day. “I’m glad the doctors said surgery went well. It’s obviously an injury that he should be able to recover from,” Self, who coached the 7-foot Cameroon native for one season at KU, said Friday night. By Gary Bedore

Kansas University freshman center Joel Embiid, a 7-footer from Cameroon who averaged 11.2 points and 8.1 rebounds for KU in 28 games during the 2013-14 season, announced his intention to turn pro at the Allen Fieldhouse media room this afternoon with several coaches and teammates in attendance.

Kansas University’s basketball players, who have headed home for four days worth of holiday cheer, will gather again Thursday for the first of many practices the next four weeks. By Gary Bedore