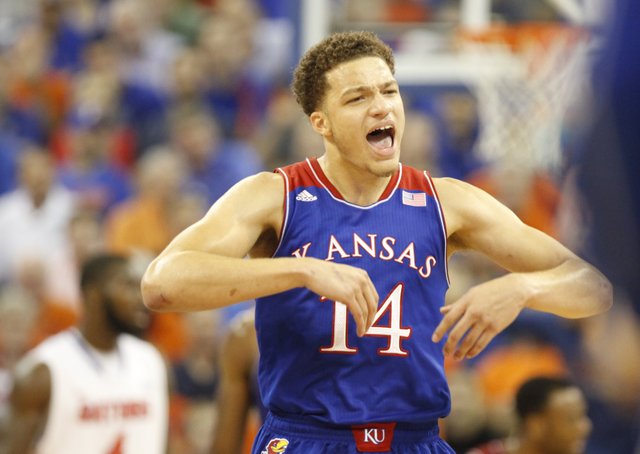 Kansas guard Brannen Greene celebrates during a Jayhawk run against Florida during the second half on Tuesday, Dec. 10, 2013 at O'Connell Center in Gainesville, Florida.

When the 2014-15 preseason USA Today Coaches poll was unveiled Thursday, Kansas University’s men’s basketball team landed in the top five — No. 5, to be exact.

The networks and times have been finalized for the second SEC/Big 12 Challenge, the two conferences and ESPN announced Tuesday.

Column: Brannen Greene not sulking about not starring

Not long ago, Joel Embiid was the one watching Brannen Greene and the rest of his talented AAU teammates get all the playing time while he sat on the bench. They have traded roles, but Greene says he doesn't feel overlooked. Column by Tom Keegan

Column: Brannen Greene starting to figure it out

Talented freshman wing Brannen Greene has weaved his way through traffic to establish himself as the man to beat in a three-headed race for the first-shooter-off-the-bench role for Bill Self’s 7-3 Kansas University basketball team. By Tom Keegan