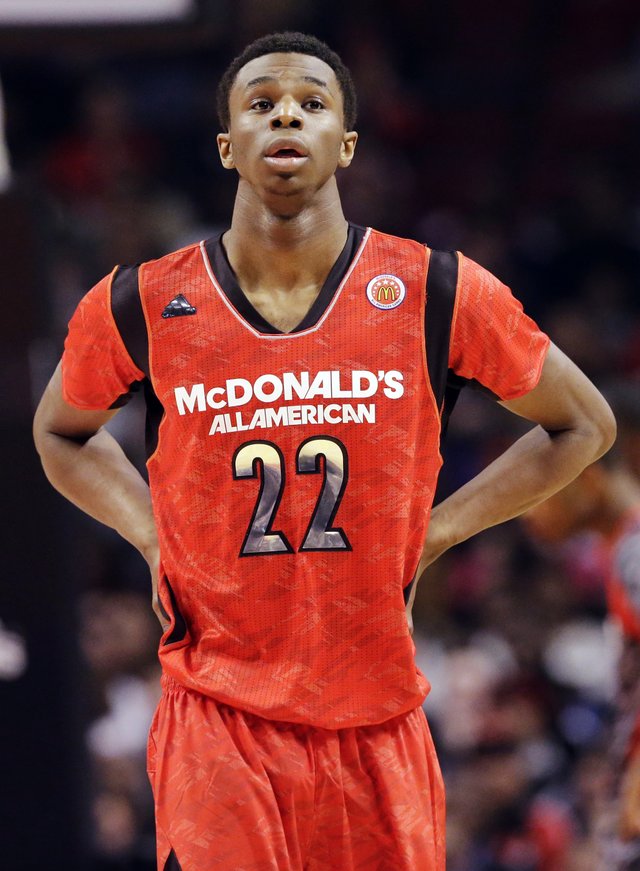 The buzz started late Saturday morning when Kansas University basketball coach Bill Self told his campers that prize freshman forward Andrew Wiggins of Toronto was en route to KC International Airport. Just a few hours later, the country’s No. 1-rated recruiting prospect in the Class of 2013 was on KU’s campus, as confirmed to the Journal-World by Self. By Gary Bedore

Andrew Wiggins, the No. 1 prospect in the high school recruiting Class of 2013, will sign a letter of intent with Kansas University, Florida State, Kentucky or North Carolina at 11:15 a.m., Central time, today in a ceremony at Huntington (W.Va.) Prep High School. By Gary Bedore

With a commitment on Tuesday, all but one of Rivals.com’s top 150 players in the Class of 2013 have committed to a college with seven days remaining in the spring signing period. The lone uncommitted player, of course, is top-ranked Andrew Wiggins, who has Kansas University in his final four. Notes by Gary Bedore

I have no idea whether former NBA guard Mitchell Wiggins has any coaching experience, but I sure would ask him if he has any interest in trying out the profession if I were one of the four schools recruiting his son, Andrew Wiggins. By Tom Keegan

Opinion: Guessing game — Nobody knows where prep phenom Andrew Wiggins will spend his one year in college

A voice of reason rises above the discordant sounds of self-annointed expertise regarding the recruitment of an 18-year-old basketball player. And that wise voice belongs to the teenager himself. By Tom Keegan