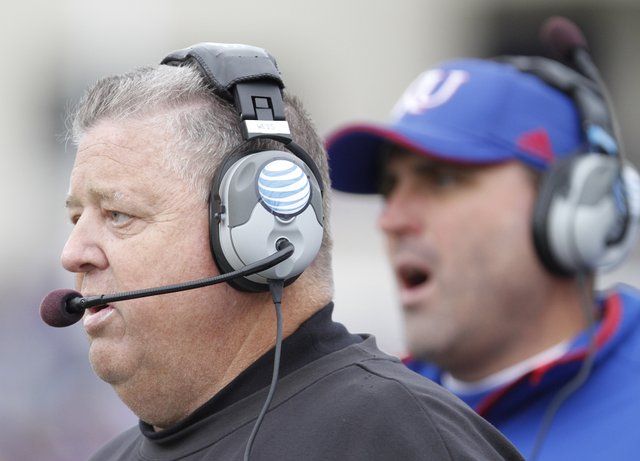 Kansas head coach Charlie Weis watches from the sidelines during the fourth quarter on Saturday, Oct. 6, 2012 at Bill Snyder Family Stadium in Manhattan.

Those wondering if Kansas University football coach Charlie Weis has been around long enough to understand fully the importance of the Sunflower Showdown rivalry with Kansas State need look no farther than Tuesday’s news conference, where Weis demonstrated genuine and prolonged enthusiasm for his second go-around with the Wildcats. By Matt Tait

Kansas University football coach Charlie Weis says the upcoming bye week — after a draining loss and during the Thanksgiving holiday — came at the perfect time for his team. By Matt Tait

It’s no secret that the Kansas University football team’s offense has struggled this season. Outside of the 31-point performance in the season opener against FCS foe South Dakota State, the Jayhawks have averaged just 15 points per game, a number that dips to 11 against Big 12 defenses. While KU’s erratic quarterback play has been the main reason behind the poor output, KU coach Charlie Weis said this week that low-scoring games had been part of the plan.

Weis promises to explore all options before OSU game

Following Saturday’s loss to Kansas State, and again during a conference call with reporters on Sunday night, Kansas University football coach Charlie Weis vowed to explore anything and everything that could solve his squad’s second-half struggles. Tuesday morning, during his regular weekly news conference, Weis shared the details of a new plan that was mostly personnel driven.

Discussing the present state of Kansas University’s football team is too depressing, so before looking into the future for potential relief, a look into the distant past is in order.