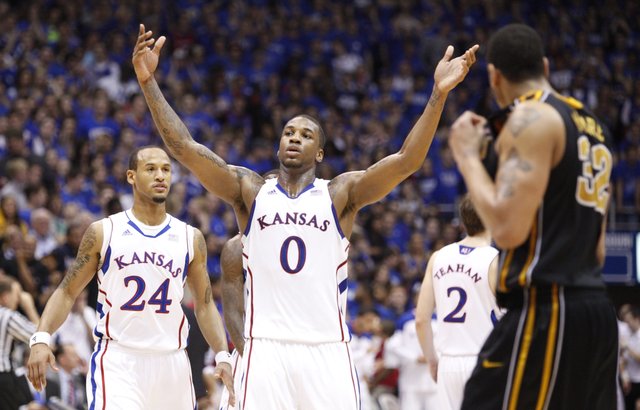 Kansas forward Thomas Robinson raises up the fieldhouse during overtime against Missouri on Saturday, Feb. 25, 2012 at Allen Fieldhouse.

Bitter rivals Kansas and Missouri have agreed to play an exhibition basketball game at the Sprint Center in Kansas City on Oct. 22 to raise money for hurricane relief efforts.By Matt Tait

Is the Border War back?

KU, Mizzou in discussions about an 'event' to raise money for hurricane relief

Could the Border War be coming back? For at least one day in the not-too-distant future, that may very well be the case. By Matt Tait

All the whining in the world isn’t going to bring the Border War back to life, but an NCAA tournament bracket has the potential to make it happen as soon as March of 2018. By Tom Keegan

Kansas junior forward Thomas Robinson was selected as the Big 12's player of the week, the conference announced Monday.

Kansas University basketball coach Bill Self had a heart-to-heart talk with junior forward Thomas Robinson on Thursday — a day after Robinson was whistled for a technical foul in the final minute of a 66-58 victory at Texas A&M.