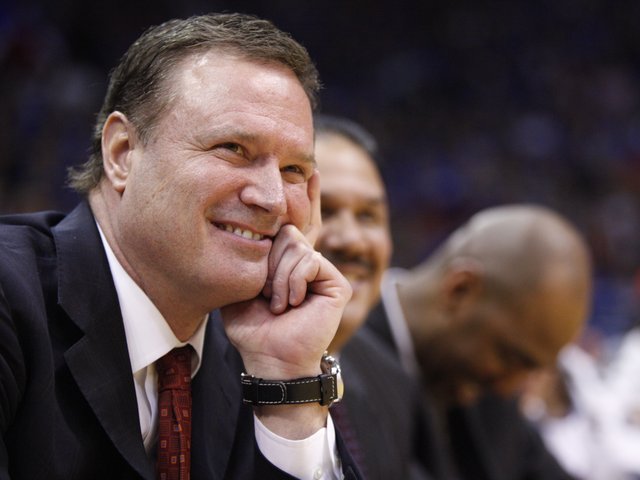 Bill Self says he wants MU to remain a member of the Big 12. If the Tigers leave, however, it could mean the end of regular season basketball games between the rivals.

Bill Self gave a simple, direct, forceful answer when asked if the uncertainty surrounding conference realignment is something that might someday drive him out of college athletics. “No. No ... because everybody adjusts,” Self, Kansas University’s ninth-year basketball coach, said Wednesday in an interview with the Journal-World.

Already known for its place at the top of the school’s athletic mountain, the Kansas University men’s basketball program continues to carry the torch for the academic side of the university’s athletics department, as well. Tuesday morning, the NCAA and KU released the results of the most recent Academic Progress Rate numbers and they revealed that head coach Bill Self’s squad was one of six programs at KU that delivered a perfect APR score of 1,000 during the 2009-10 school year.

Bill Self, Roy Williams to participate in Mayetta golf event on Sunday

Not without fault: Bill Self confesses shortcoming after winning AP award

Kansas University’s Bill Self, who was named the Associated Press Big 12 Coach of the Year on Monday — a day after the league coaches accorded him the same honor — insists he has his faults.