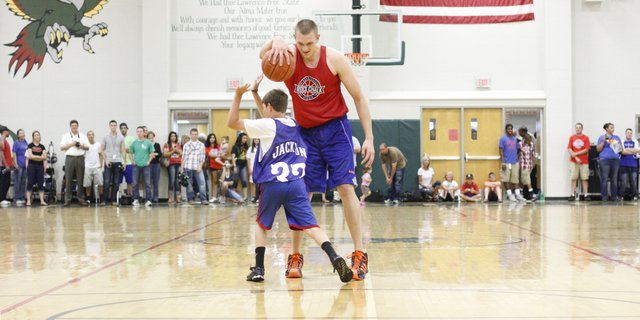 Cole Aldrich dribbles the ball over the head of Bryce Crowell during the second half of the Rock Chalk Roundball Classic on Thursday, June 16, 2011 at Free State High School. Crowell won a game of knockout before the game for the chance to play with the former Jayhawks.

Crowell held a press conference and signed an early LOI following this photo. He's seeking a deferrment from attending high school and joining the team right out of middle school. He was quoted as saying "...I think I can make the jump right into D1. My skills would not be utilized in high school and I plan on working out in Vegas before returning to Lawrence for my freshman year." He said he can't wait to get into the weight room with Hudy and work with DManning. Of course, this is all pending new rules being adopted by the NCAA.