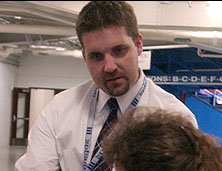 A former University of Kansas athletics official has asked a federal judge to delay his sentencing in a case tied to a $1 million ticket scalping scandal at the school.

A former KU Athletics employee who resigned in the wake of the million dollar ticket scandal pleaded guilty Wednesday in U.S. District Court in Wichita.

Two former Kansas Athletics Inc. employees are facing federal charges that they knew about a ticket-theft scheme without telling authorities in a timely manner.