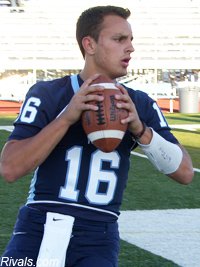 Court officials confirmed Thursday afternoon that Kansas University quarterback Brock Berglund, a freshman from Highlands Ranch, Colo., who has been charged with third-degree assault in his home state, has a court appearance scheduled for 9:30 a.m. Monday in Castle Rock, Colo.

Three practices into spring drills, the Kansas University football program received some good news Tuesday. Brock Berglund, the three-star quarterback from Highlands Ranch, Colo., who graduated from Valor Christian High last December, enrolled and began taking classes at KU in January and returned home in early March because of “personal circumstances,” told the Journal-World, via text message, that he would be in town to watch a portion of spring practice.

QB says KU offense similar to one he played in HS

It takes less than five minutes of talking to him to realize two things about Brock Berglund, the latest Kansas University football commitment who orally pledged to join the Jayhawks on Monday. First, Berglund is confident. Extremely. Second, he was born to be a quarterback.

It turns out there was a Plan B for Kansas University’s football program after all.