Kansas football defense improving but still a work in progress 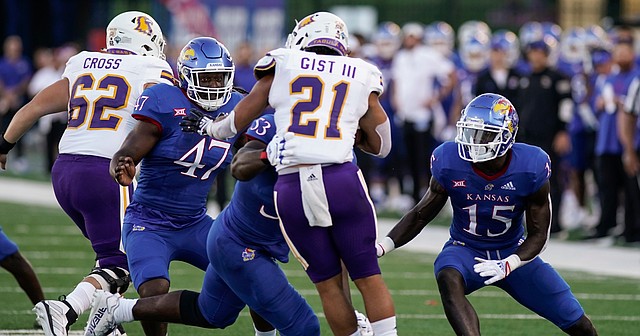 With the Kansas football offense putting up all kinds of eye-popping numbers that rank among the best in the country, the shortcomings of the KU defense thus far have slid under the radar a little bit.

That is, unless you’re talking to the KU defensive players themselves.

Even in the aftermath of last Saturday’s 35-27 win over Duke that moved Kansas to 4-0 on the season and the brink of being ranked for the first time in 674 weeks, several Jayhawks talked about the need to improve the team’s defense if they want to continue their early roll.

None of them said it more clearly than edge rusher Lonnie Phelps Jr.

“It’s straight to the film room after here,” Phelps said during postgame interviews following last Saturday’s win in front of a sellout crowd. “Keep correcting those mental errors as we go on and keep building up.”

Through four games, against a schedule that ranks as one of the 50 toughest in all of college football, Kansas ranks in the bottom half of the FBS in several key defensive categories.

The Jayahwks also sit in 60th in red zone defense and 65th in rushing defense, putting them just inside the top half among FBS programs.

KU has been better than average in several areas on defense, including ranking 35th nationally with 10 sacks and sitting tied for 47th in turnover margin, taking the ball away more than the offense is giving it up.

None of those numbers tell the complete story nor are they the final evaluation of what the Kansas defense expects to become. Regardless of the numbers, this is a unit that continues to take the field believing good things will happen.

Defensive coordinator Brian Borland said coming back from a 14-0 hole on the road at West Virginia and sealing the win with a pick-six by cornerback Cobee Bryant “did wonders” for the Kansas defense.

And most of the team’s confidence is derived from making big plays in key moments. Last week against Duke, Eddie Wilson’s speed and tenacity on a key fourth-and-short running play ended a Blue Devils’ drive and sent the David Booth Kansas Memorial Stadium crowd into a frenzy.

Sophomore defensive back OJ Burroughs smiled when he was asked this week about the strengths of the defense.

“More confidence, more swagger, flying to the ball,” he said. “But we can still improve a lot. We just have to work on the little things throughout practice and make sure we’re not playing off our emotions and that we play disciplined, fundamentally sound football. It’s not easy, but that’s what we’re working on.”

That last part is what Borland likes the most. Each week, each day even, he watches his group hit the practice field with a burning desire to get better.

They have done just that in many areas, and Borland said, overall, he feels “decent” about where the defense sits through four weeks.

“We’ve made some strides, and we’ve got to continue to make more strides,” he said. “We’re certainly not where we fully need to be yet, but we’re on the way (and) still growing for sure.”

Better depth, more talent and a greater understanding of what KU wants to accomplish on defense all have aided the Jayhawks thus far. And head coach Lance Leipold said he has liked the way his defense has been much more aggressive this season compared to 2021.

With that aggression comes mistakes, but Leipold said he can live with some of those. What he wants to see next is more consistent play and greater discipline.

“It’s just small details,” Borland said. “It’s a fine line between success and failure sometimes. I think some of that comes through experience, which we’re still gaining. As guys improve, I’m confident that stuff will shore itself up, as well.”

So, too, is Wilson, who said the entire defense has continued to follow the mantra of trying to get a little bit better every day.

“The devil is in the details,” Wilson said. “We’re playing good, but once we just clean up the little details and take that next step, we’re going to be a very good D line.”

Asked what it might look like if the offense stays hot and the defense improves to the point of putting it all together for four quarters from the trenches to the secondary, Phelps just whistled.

“I don’t think there’s a ceiling,” he said. “We’re shooting right through it. Skyrockets.”

In order to get there, though, the path is simple.

“Guys know what they’re doing out there,” Phelps said. “They just have to focus in and do it in the exact moment.”

Added Borland: “I definitely feel like guys are confident. I feel like they feel like they’ve worked hard and earned the opportunities they’re getting right now and we’re trying to cash in on them.”

The next chance to do that will come at 2:30 p.m. Saturday versus Iowa State.